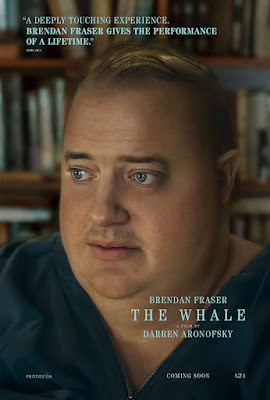 Let’s get the elephant in the room out of the way immediately, yes, it is extremely likely that Brendan Fraser will follow Will Smith as the winner of the Academy Award for Best Actor. I don’t want to take anything away from his performance, but there is a sociological reason for this to happen in addition to the artistic achievement.

Fraser has been largely absent from the film world since his heyday twenty years ago. A story about his physical decline and about abuse by Hollywood entitled power players suggested a career that was largely in the rearview mirror. This is a comeback story, and the guy making a comeback is one of the most likable fellows you are going to encounter.

This is perhaps the perfect counter-programming to last year’s disastrous ceremony, where the eventual winner of the acting prize assaulted the host and was not removed from the venue but actually got up a few minutes later to receive an award that was overdue but was now clouded by controversy. Two years after presuming a win by the late Chadwick Boseman, only to be shown as craven exploiters of the emotional turmoil, the Academy needs a clear win for a popular player that will generate little controversy and much-needed goodwill.

Now as to the performance itself, it is truly memorable. Fraser has to restrain his emotions in some segments and let them spill out in others. His voice is heard early on when talking to his online class, and the deep tenor of that voice feels completely appropriate for the English professor he is. When we see him, it is at first difficult to reconcile the voice with the body because of our natural reflex to classify things together. “Tall, dark and ugly” is not the phrase that comes to mind. We expect handsome.

Now take the voice. “Rich, assured, and disgusting”, no that does not work either, but in the long run, that is what we are going to be faced with. “Charlie” is not disgusting simply because of his morbid obesity, but rather the sloth that has led to it. His self-concept reflects self-loathing and he recognizes the destructive path he is on, but is unwilling to change it. Fraser plays Charlie as a sympathetic figure with deep flaws. He is a real human being with emotions and conflicts that all of us share. His uplifting attitude in talking about his daughter and the essay about Moby Dick that he continues to focus on, are inspiring and frustrating at the same time. He has taken the words of  Samuel Hunter the playwright and screenplay author, and made them sing at the right moments.

Director Darren Aronofsky has made one film I love (“The Wrestler”) and one that I find maddeningly irritating (“Black Swan”) and two films I have stayed away from because the word of mouth on them simply told me I should avoid them (“The Fountain”/”Mother!”). This story adapted from a play, probably tightens the direction of the film a bit because the locations are very limited, and the biggest visual element is the physical presence of the main character.

I did very much like the way the characters coming into the scene were sometimes glimpsed in shadow, passing by a window before entering the apartment. On the other hand, the number of times the angry daughter storms out and pauses in the doorway in silhouette seemed excessive. In spite of the limited cast, the camera does not overuse close up to create a claustrophobic atmosphere. The real dilemmas of a morbidly obese man are painfully demonstrated without being used to manipulate our emotions.

There are only six characters on screen in the film, and the two youngest other than Fraser himself, have to carry a lot of the story burden. Ty Simpkins is a young actor with a pleasant face who conveys an innocence that may not be real. The character of Thomas, an evangelical missionary, presents discordant behaviors, sometimes offering us a sympathetic person who can be admired for his faith, but also someone who leads us to a point of anger with the blind judgmental way his faith may influence his perception. Sadie Sink, from “Stranger Things,” is the other jewel in this film. She perfectly embodies an entitled Gen Z teen with resentful daddy issues. Her casual cruelty may or may not be in the best interest of the other characters, but we can see how it can go either way. It is Charlie’s insistence on his perspective that ends up making this an emotionally engaging story.

In a way, this film is about selfishness. Charlie’s selfish decision in regard to romance had a devastating effect on others. Alan, his dead partner, committed one of the most selfish acts known to man; it had consequences to others that were as substantial as Ahab’s metaphorical whale. Charlie is repeating the process by committing the slowest, most indulgent form of suicide you can imagine.

This film reminds me of “Leaving Las Vegas,” where our protagonist has elected to deal with his grief in the most destructive manner they can choose. We need to understand Charlie’s grief a little bit more so that we can sympathize in spite of his self-destructive behavior. We never quite get there, but it is close. In the end, it is the love he has for his estranged daughter, in the face of all her animus and anger, that allows us to forgive the character. He does not fling invective at Thomas for his conclusions about Charlie, and that is another plus. The two other women who appear in the story deserve better than what Charlie is giving them, but they too have made their peace with it, and so we can as well. The essay that he obsesses over is itself a commentary on his life, and it is a theatrical device that works well for the story.

Be warned that there are moments in the film where you will feel revulsion at Fraser’s character. Gluttony is not, as once observed by Orson Welles, a secret vice. Seeing it frantically displayed, however, can be a bigger challenge than observing the results. Aronofsky’s film “Requiem for a Dream” may be one of the best anti-drug messages ever made; “The Whale” could do the same thing for our dietary habits, except that some idiot out there will probably argue that it is fat shaming.