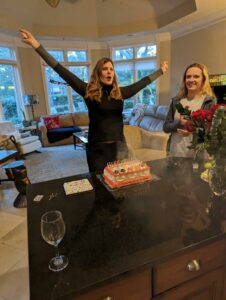 My wife’s birthday is two days after Christmas.  Which is tough.  Nobody wants to celebrate a birthday two days after the big guy’s party.  So I usually have a surprise party for her, in June or February or something, so she can have a real birthday, like everybody else.  But I also have a birthday party for her on her birthday, of course.  So really, if you count them all up, she’s well over 100 years old now, and looks pretty good for her age, I think.

Anyway, we had a birthday party for her today, on her birthday, as we should.  Her three daughters snuck around and bought all the purses and shoes that she’d admired on shopping trips over the past year.  Which is A LOT of purses and shoes.  But I digress.  I decorated the house with cheap streamers from WalMart, we ate cake, and we sang Happy Birthday.  She blew out A LOT of candles, and her kids cheered, through the smoky haze.  It was lovely.

There are many types of wealth on this earth.  Money is one of them.  But so is this.  Devoting your life to the improvement of others.  With no hope of any possible repayment.  Now THAT is beautiful.  As you can see from the expression on her grown daughter’s face, as she blows out her birthday candles.  My wife raises her hands in victory, but not over the candles.  Well, that too.  But more importantly, over a life well-lived.  Over children well-raised.  Over a job well-done.  And those children, now adults, appreciate her sacrifice.  Well, for a moment.  Which is more than enough.  It was lovely.

But their mother is their foundation.  The rock they stand on.  The rock which is so solid that they sometimes forget it is even there.  It just is.  It never occurs to them to doubt it.  That would be absurd.

As it should be. 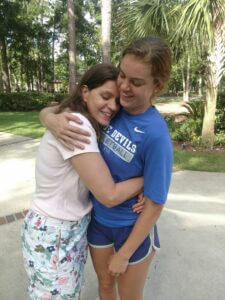 My wife is only 6’1″. My oldest daughter is not so tragically short…

Providing a base so effortlessly solid for someone takes a lot of effort.  Effort which will never be recognized.  Which is ok, because you didn’t do it for recognition to begin with.

How many times did your daughters overcome an obstacle, as you cried yourself to sleep that night?  It doesn’t matter.  You’re the mother.  You’re the rock.  So you carry on, and you continue to take care of everyone.  Except yourself.  As you should.

As you should be.

So you celebrate when you blow out your candles.  And your daughters smile.  For a moment.  And that’s all you need.

Because there are many types of wealth on this earth.