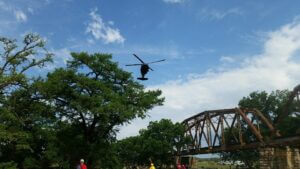 My wife and I were coming back from a medical call yesterday. We were working as part of our local VFD supporting our county EMS agency. She also works for EMS part-time as a paramedic, and was telling me about how one of her partners had said how much she liked it when my wife was driving the ambulance. She admired that my wife has a methodical approach to checking the ambulance before moving — lights, controls, etc.

Since Mrs Tex was a pilot for so many years, of course, that sort of checklist-driven approach is second nature. But I believe that, in general, that’s a more personality-type-driven approach to things.  I’m a type A personality (I sometimes joke I’m type A squared), as is the Mrs. While operating dangerous machinery certainly would reinforce those personally traits, I think it’s more an intrinsic approach than a learned behavior.

I know one can become too wrapped up in routine behavior; my daily coffee-making probably looks like ADD to others, but I find it reassuring.  Maybe comforting is a better term.  Is it a drive to reduce surprises?  Maybe it reduces the joy of spontaneity, but spontaneity can be right on the border of unpleasant surprises.  One interesting thing is that fire and EMS calls are almost never routine, and one common mistake is assuming that you know what’s going on after the first couple of minutes (sometimes even seconds) on scene.

As an example: probably three-fourths of the calls we get for suspected strokes end up being hypoglycemia, which we can usually fix right there without needing to transport someone.  But if you wrongly assume it’s hypoglycemia and you have neglected lining up rapid transport, suddenly you are way behind the curve.

Despite my belief in using routines, I really enjoy the fact that these emergencies are always different.  It’s hard to reconcile, but I guess that’s like everything else that makes life worth living.