First up, King County is at the top of the Fox News mobile app today.  That would be a story titled “Scrooged” about how they positively forbid their employees to display anything religious on or around their personal workspaces, including “virtual workspaces” for those still too fearful of fellow employees to come to the office.  It is well-known that Seattle is about as anti-religious as any place in America.

Of course, they are also so Leftist that no one can say or do anything, for fear of offending someone.  Fear of Covid and hatred of religion do not make King County a very nice place to be, much less to work.  And that’s not even counting the homeless camps and crime in the vicinity of the County Administration Building in downtown Seattle.

Next up, a small weather report.  Much of the past week saw temperatures in the teens and low twenties, and snow everywhere.  There were news stories about the freezing rain that set in on Friday, leaving streets covered in ice, and thousands of homes without power.  We didn’t get any freezing rain where we live, but our internet went down for a few hours.  I did see a product of the freezing rain, however, across the street from our house. 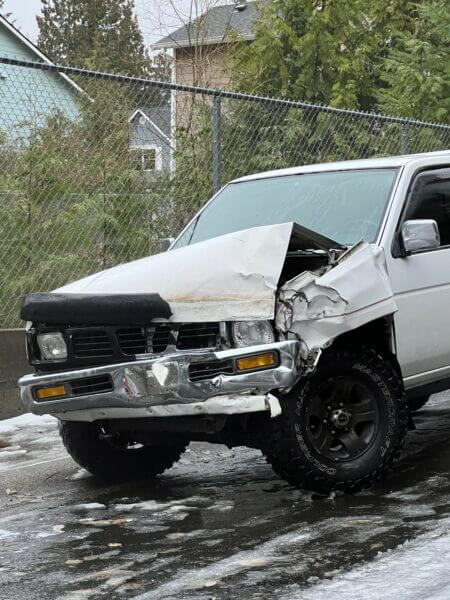 There are some great videos in my Twitter feed of cars sliding down icy streets, crashing into cars, and threatening people.  Everything is back to normal now, snow all gone even from our neighborhood.  Here’s a link to a post I made on my personal blog on December 20.