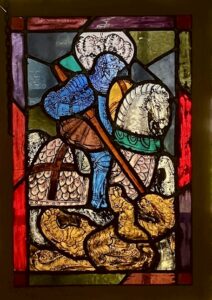 …some wretched (and I use the word advisedly) “guest preacher” at Trinity (Cambridge) College Chapel yesterday, who took the opportunity, during the Evensong service, to expatiate on the matter of Jesus’s sexuality while displaying Medieval and Renaissance paintings (from Europe) in which he focused on depictions of Christ’s penis (which are vague and rather amorphous in several paintings–hardly surprising really, given the subject matter, not to mention the tendency of art “restorers” in intervening centuries to airbrush out such things which might–in their time–have been considered overly-descriptive details.

Once he’d put that ticklish matter to bed, our hero (Joshua Heath, a “junior research fellow” whose Ph.D. work was supervised by former Archbishop of Canterbury, Rowan Williams), began to deconstruct the matter of Christ’s wounds as depicted in a series of paintings.

Apparently, penetrative (as in “arrow” or “spear”) wounds remind him of vaginas. And so he lovingly traced the outlines of the wounds in an effort to point out the similarities. (Ugh. I cannot help feeling this says more about him than it does about the artist.)

the sermon displayed three paintings, including Jean Malouel’s 1400 work Pietà, with Mr Heath pointing out Jesus’s side wound and blood flowing to the groin.

I am not sure if Mr. Heath–or Reverend Heath, or whatever the Hell it is one is supposed to call him–is a “gravity denier,” but here is a photo of the image in question: 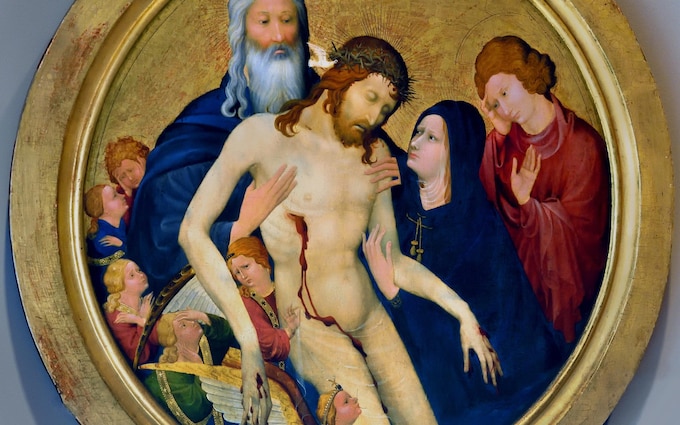 Apparently, the image of “blood flowing to the groin” is supposed to be indicative somehow of Jesus’s “trans” identity.

I ask you–reasonable men and women all–where else is the blood supposed to flow? Upwards, into His nose?

I really can’t think of anything more stupid than this, a theory that the great artworks of Western Civilization, undertaken a millennium-and-a-half after Christ’s death, should be shoehorned into some idiotic woke theory to suit a 21st-century moron obsessed (and not in a good way) with untoward sex.

Not only does it disrespect the actual facts on the ground–Christ was a Middle-Easterner who likely didn’t resemble any of our traditional representations of Him at all, it also denigrates other cultures whose Christian adherents represent Him in their own way.  (I remember some of the very careful and respectful ways in which the Christian missionaries in Nigeria found ways to make Christ relatable and understandable in a primitive culture, without either insulting that culture, or diminishing the Christian message.)

Really, Joshua Heath.  If you want a transgender Christ-Hero, draw your own, and leave my Christian art history, and my tradition alone.

Plus, and:  Shame on you, Dr. Michael Banner, Dean of Trinity College, who–post flap–said that Heath’s view was “legitimate.”

A congregation member, who wished to remain anonymous, told Dr Banner in a complaint letter: “I left the service in tears. You offered to speak with me afterwards, but I was too distressed. I am contemptuous of the idea that by cutting a hole in a man, through which he can be penetrated, he can become a woman.

“I am especially contemptuous of such imagery when it is applied to our Lord, from the pulpit, at Evensong. I am contemptuous of the notion that we should be invited to contemplate the martyrdom of a ‘trans Christ’, a new heresy for our age.”

The worshipper said the audience and choir in the traditional Anglican service, with children present, was “visibly uncomfortable” at the “truly shocking” sermon, which “made me feel unwelcome in the Church” and his partner felt “violated”.

PS: Evensong is my favorite Church of England service.  I’ll be damned if this fool is going to ruin it for me.