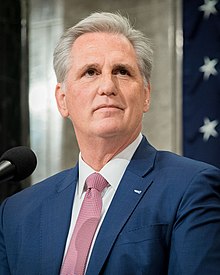 To be clear, I am not a big fan of Kevin McCarthy, who is currently the House Minority Leader. Whenever I see him interviewed, he expresses himself with enthusiasm, but I’m not quite convinced that he means it. Maybe that’s my problem and not his.

But it appears that there’s a good chance he may be the next Speaker of the House, although that outcome is not set in stone. So, while McCarthy declares he will remove three Democratic committee members from House committees (which is not as easy as you’d think), he’s not a shoo-in for the Speaker position. All in all, Rep. McCarthy may be out over his skis. Let me say upfront, however, that I still hope he does win the Speaker’s job, and that he outrages some Democrats by removing their members from committees.

Let’s look at the position of Speaker first. The following convoluted description explains why he might not win the Speaker role:

McCarthy won the GOP nomination by a 188-31 vote, putting more Republicans against the party leader than he could afford to lose during a full House vote.

This could prove disastrous for the House minority leader while he courts GOP lawmakers for their support, as some Republicans have been outspoken that they won’t support his speaker bid. That list includes Rep. Matt Gaetz (R-FL) and Andy Biggs (R-AZ), who challenged McCarthy for the speaker nomination last week.

‘I’m not voting for Kevin McCarthy,’ Gaetz said on the Charlie Kirk Show last week. ‘And I am certain that there is a critical mass of people who hold my precise view. And so the sooner we can sort of dispense with the notion that Kevin is going to be speaker, then we can get to the important work.’

However, McCarthy could skirt by without garnering the lucky number of 218.

To win the speakership, McCarthy only needs to win a majority of the votes from lawmakers on the floor. However, House rules show that if GOP lawmakers who do not support McCarthy’s bid simply vote ‘present,’ the final number needed to win the majority is lowered — giving him a better chance to win.

That way, House Republicans can choose not to support McCarthy while not jeopardizing his chance at becoming speaker.

These are the kinds of infighting that the Republicans cannot afford; they appear petty and bitter. Frankly, I would like to see someone stronger and bolder in that position, but when the Republicans’ vote was taken for the Speaker position, he was clearly favored; the time to select someone else has passed.

For the sake of argument, let’s assume that these machinations for the Speaker position are overcome and McCarthy can act on his promises to remove Ilhan Omar from the House Foreign Affairs Committee, and Adam Schiff and Eric Swalwell from the House Intelligence Committee. He can’t remove Omar without a full vote of the House. But of course, Omar is outraged at his announcement in response to her anti-Semitic remarks:

‘McCarthy’s effort to repeatedly single me out for scorn and hatred — including threatening to strip me from my committee — does nothing to address the issues our constituents deal with,’ Omar said in a statement.

‘What it does is gin up fear and hate against Somali-Americans and anyone who shares my identity, and further divide us along racial and ethnic lines,’ she added. ‘It is a continuation of a sustained campaign against Muslim and African voices, people his party have been trying to ban since Donald Trump first ran for office.’

Maybe Omar should have thought about the consequences of her comments before she spoke them. And, of course, her remarks are intended to smear others rather than for her to accept responsibility.

It would take too much space to list all the abuses, lies, and leaks that Adam Schiff promoted, in particular, the blatant lies he created for the Russian hoax. But if you’d like to review most of his unethical, unprofessional, and revolting activity, you can read it here.

And finally, there is Eric Swalwell, who allowed himself to be duped by, and become involved with, a suspected spy from China. Military representatives have said that he should have been kicked off the Intel Committee for the threat he posed to national security. I agree.

So, let me bring all these points together. The Republicans in Congress have been, to be generous, less than bold in acting against Democrats. They have not stood against more spending, or stood effectively for accountability, and they continue to fight with each other, therefore dividing the power of the GOP.

It is time for a change, big time. Here are the outcomes I hope to see:

We finally have some power to let the people know that we are in charge and we can actually improve their lives, turn the country around and make exciting things happen.