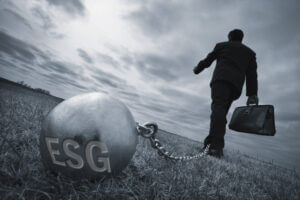 The world of finance is turning bullish on ESG, an investment strategy directing funds to corporations with woke environmental, social, and governance policies. Trillions of dollars have already flowed into ESG funds, projected to hit $50 trillion in two years.

ESG boosters claim the funds enable investors to do well by doing good. You can make good money while simultaneously bettering the world.

Wish it were so. In fact, ESG funds do neither.

Investing goals that compete with shareholder profitability have predictable results. A recent NYU study compared investment results created by firms with high versus low ESG scores, which are generated by professional ratings agencies. Over the past five years, high ESG funds have returned 6.3% compared with 8.9% for others. Over time, that’s a chunk of change.

Thus, Kentucky AG Daniel Cameron warned his state’s pension fund managers to avoid funds that “put ancillary interests before investment returns,” which would “violate statutory and contractual fiduciary duties” to the pensioners depending on them. Seniors deserve better than to have their retirements hijacked by an ideology they might not share.

The basic tenants of ESG are radical environmental policy (primarily the elimination of fossil fuels), woke social policies promoted by the company, and corporate governance that replaces merit with preferences based on race or gender.

The driving forces behind the growth of ESG are three very powerful financial firms. BlackRock, Vanguard, and State Street are, between them, the largest shareholders in 80% of the companies in the S&P 500. Their financial heft gives them the ability to force companies to implement ESG, making them, in effect, upstream controllers of these companies.

ESG is based on the foundational principle of progressivism – the notion that the most beneficial governance comes from giving experts, the best and the brightest, control over our lives. Personal freedoms and democratic processes must yield to a governing elite that knows best.

No goal is pursued more tenaciously than the elimination of carbon-based fuels.  Consumers must be pushed into using renewables, principally by regulating fossil fuels into being scarce and expensive.

Green New Dealers may be thrilled to have the backing of the ESG behemoths, but the problem is that Europe is already experiencing a full-blown energy crisis, with America not far behind. For a year now, a post-Covid demand surge, combined with nuclear plant closures worldwide, long-standing over-investment in impractical renewables, and a global drop of over 50% in oil and gas investment since 2014, have combined to put serious pressure on economies worldwide.

Aluminum smelters, glass factories and other EU manufacturers have had to shutter plants for lack of affordable energy. In the UK, the number of people behind on their energy bills ballooned from 3 million to 11 million earlier this year. Even in relatively secure Germany, there is deep concern over looming shortages of heating oil this winter after being shut off by Russia.

The hard fact is that, in our current state of technology, fossil fuels are the mainstay economic resource, whether we like it or not. We need more oil, natural gas and nuclear energy, not less.

The hard-core environmental left, now join by ESG interests, has worked itself into a lather insisting we can only avoid global catastrophe by achieving zero carbon emissions by 2050. Environmental alarmists achieve about the same accuracy with their predictions as the apocalyptic preachers of yesteryear. But even in the early stages of the project, it’s becoming obvious that it’s simply can’t be done.

Even if eliminating all emissions of carbon would significantly reduce atmospheric temperatures, and even if humans are the main villains of global warming and even if we could somehow convince China and India to not sabotage the effort, it doesn’t matter. It’s neither economically nor politically possible to deprive humankind of the benefits of carbon fuels.

The financial titans pushing ESG are blowing an opportunity to do some real good. We need respected leaders who can stand up to the hysteria and exaggerations to propose practical, feasible solutions that would protect humanity from the worst effects of atmospheric warming.

Instead, the self-appointed experts are using other peoples’ trillions to push us down the road to dystopian government and perpetual poverty.