Yes. James Carville’s home state of Louisiana. Look at this map from the NYT. 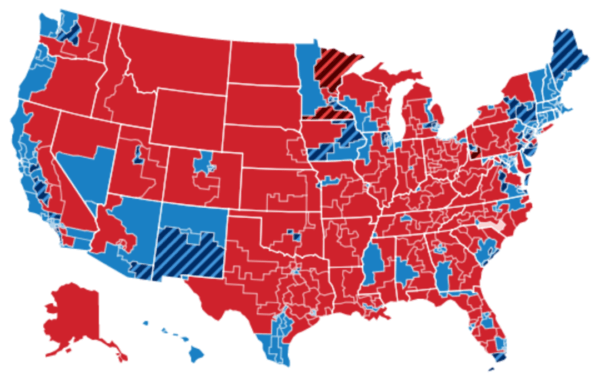 And what does Democrat strategist James Carville have to say about it and about turning the South blue?

JAMES CARVILLE: The Louisiana state [Democratic] Party has had a very difficult time in the last year, I’ll leave it at that.

You have to understand, Louisiana has about 33% black total population. It’s very rare, if we could get the black contribution to 33 (that never happens, or seldom happens) we’d be in a lot better position. A state that interests me a lot is Mississippi which is 37, maybe 38% black, it only votes 30. If you got your staff from 30 to 38, that’s a lot of votes.

And we don’t lose that bad in Mississippi, not that big. It’s not as many electoral votes, but we might be better off looking harder at Mississippi than Florida. I don’t know that. I’m just throwing a riff off the top of my head. But it’s been very frustrating. I think some of our previous consultants you had on, I’ve been trying to tell some of these big fundraisers, the massive GOTV, massive voter registrations in the Mississippi delta, the Louisiana delta.

Most of the black folks in my part of the world live close to the river, where i grew up was probably 80% black, I grew up right on the river. I think consultants are making some good points, but we’ve got to be realistic here.

Are blacks even listening? If you’re black in America, your vote is assumed. You’re going to vote Democrat. The Party of Jim Crow just needs you to turn out.

And for what? How has the Democrat party improved your lives or the lives of your children? Through public education? Don’t make me laugh. Bitterly. Because the party wants you to continue to abort your babies at over 50% in New York City?

Blacks are still enslaved in this country. They’re toiling in the slums of poisonous progressive ideology in all the major cities. It’s past time to wake up!