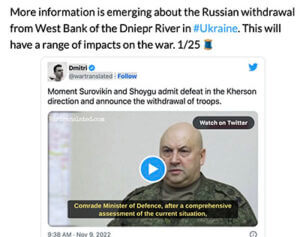 As a break from all the mid-term gloom, a thread on the latest Russian retreat. A trap? A “strategic regrouping,” perhaps, as those invested in Russian success might say.

It’ll be interesting to see how this is digested and excreted by the propaganda talk shows, which have been rather glum of late. They bring on a war correspondent to tell the folks how the valorous troops will soon be capturing more villages, and he says “we’re advancing 3 centimeters a day.” You turn to Solovyev’s daily reenactment of the thoughts of a sullen hungover bear who fell out of a tree last night and totally blames the tree, and you hear A) wistful remarks about how great it would be if the IIRG helped out Russia on the ground, or B) miserable monologues about how Russian culture, the beacon of enlightenment, will be lost if they don’t win, and this means the end of everything good in the world, or C) broadsides against the system that somehow did not produce the Army they thought they had (wreckers, you know, and prolly Jews), or D)  criticism of the draftees for not being motivated enough.

If I had to predict, I’d say Solovyev will lay this move at the feet of the elements in the military who have pursued an erroneous strategy to obtain a noble goal  – even though he previously said that anyone who attacked Ukraine would be a war criminal, but hey, people can change their minds, especially after a visit from the FSB and a suitcase of Euros. He will never slight Putin, but amplify the stab-in-the-back motif and blame NATO. The latter is interesting, since there seems to be a dichotomy in propaganda messaging: A) Of course we have the ability to defeat NATO, overwhelmingly, we have such marvelous toys and a great army, and B) of course we’re getting pasted in Ukraine, they have NATO on their side.