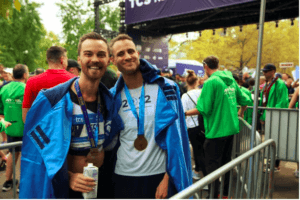 It will surprise no one that the prize money in the non-binary category was swept by – forgive the term – biological men. An irony-free celebration of the winners is available at RunnersWorld.com, itself an institution taken over by woke ideologues offering such fitness tips as Be A Champion For Black Runners By Becoming A Disruptor.

According to reporting from ESPN.com, NYRR CEO Kerin Hempel issued a press release stating, “We are so proud that the TCS New York City Marathon attracts such a diverse and global community of runners, and we are deeply focused on ensuring all of our athletes feel welcome and included at NYRR.” The same press release announced the marathon had become the first sporting event declared a “Safe Space” by the Stonewall Inn – whatever that is – in recognition of its inclusivity efforts for the LGBTQ+ community.

I reached out to the NYRR’s Director of Media & Public Relations Stuart Lieberman and asked him if the introduction of prize money for the non-binary category is limited to running athletes or if it also applies to the wheelchair division. Mr. Lieberman responded to my email by asking if my questions are “in relation to a media our (sic) public facing item you are working on?” I inferred from this response that receiving a straightforward answer to my straightforward question is contingent upon my motivations. (Mr. Lieberman declined to respond to a second request to clarify.)

The winner of the NYC Marathon’s non-binary category was Jake Caswell, a talented runner whose finishing time of 2:45:12 nevertheless would have earned him 172nd place had he competed in the open men’s category. Had Caswell competed in the open women’s category – no word yet on whether the race organizers’ famed inclusiveness would extend to this – he would have finished in 26th place and still well outside the prize money. Seconds ahead of Caswell was New Jersey’s Roberta Groner. The non-binary Caswell took home $5,000 for his effort while Groner, a bonafide woman, took home bupkis.

Nice work if you can get it – I guess.