With less than 48 hours until the polls open, and with early voting well underway, I’m beginning to think I underestimated just how bad it’s going to be for the Democrats. Here’s why:

Prices on grocery staples are up: eggs cost twice what they did at the beginning of 2021, beef and chicken are up 20% and more, even the cost of bananas is 10% higher. The cost of milk has also skyrocketed, and when CNN featured a family of 11 (some foster/adopted children), the left was quick to mock them for drinking “too much” milk (if you do the math, a gallon of milk has 128 fluid ounces, which means everyone gets just over a cup of milk a day before a gallon is depleted…that’s…too much?). In Wisconsin, the Dairy State, the price of milk went from $1.99 in February 2020 to $3+ in 2022. Families on budgets and people on fixed incomes are absolutely feeling the pinch. Goodness knows I am.

Writing for “The Federalist” in April 2022, Joy Pullman talked about inflation and a then soon-to-be-published book Inflation: What It Is, Why It’s Bad, and How to Fix It written by economist Nathan Lewis, journalist Elizabeth Ames, and businessman Steve Forbes. In the book, Forbes, et al., discuss that inflation is not “just about money” but rather:

Inflation is deeply connected to societal flourishing in general. Societies in which inflation is rampant are often unstable, chaotic, and violent.

“Markets are people,” the authors write. “When money is no longer a reliable unit of value, not only trade but social relationships ultimately unravel. Nations afflicted by extreme inflation end up experiencing higher levels of crime, corruption, and social unrest. As we have seen throughout history, the end result can be a tragic turn to strongmen and dictators.”

They declare “the rich, the well-connected, and the corrupt” winners of inflation while “losers are the poor, the middle-class, and those who work hard and play by the rules”; an “unjust system” that should be fought against. Even “steady” inflation, which the Federal Reserve tries to hold at 2% annually, means someone earning $50,000 loses $1,000 a year. That’s a huge chunk of change.

The supply chain, which was broken under COVID lockdowns, has not fully recovered. And it won’t, argues Craig Fuller (CEO of FreightWaves), until there is peace and stability in the world. Two things that, under Biden, have suffered greatly — Afghanistan, Iran, Ukraine, and North Korea are all hotspots under his administration. The issues are causing shortages of new cars and a decline in new car quality. Life-saving CPAP machines, prescribed for people with potentially fatal sleep apnea, are also in short supply. Baby formula is still in short supply, stressing families and putting infant health at risk. From what I can tell, the last press conference focused on baby formula shortages was in spring.

Additionally, the part about “crime, corruption, and social unrest?” Doesn’t that sound eerily familiar? Murder rates are up in cities across the nation. Murder rose 30% in 2020 and is up slightly from that; theft and robbery were up 20% at the beginning of this year. Starbucks — hardly a right-wing business — has closed multiple stores across the nation, citing safety concerns for staff, including Washington DC’s Union Station. In Philadelphia, Wawa is closing some stores and reducing hours in others because of crime. Clothing retailer Cotopaxi joined Walgreens and other businesses that closed in San Francisco, again citing crime as a major factor. Like with the economy, the Democrat response to crime and concern about crime is to deflect and call it a “GOP conspiracy” and blame it on red states when the reality is far different:

“Criminal homicide is primarily (which does not mean entirely) a problem that resides within large cities. The 50 largest cities in America, home to 15.3% of the country’s population, saw 34.2% of the country’s murders in 2020; 34, or 68%, of the 50 cities had Democratic mayors in 2020, while only 14 (six of which were in blue states that voted for Biden in 2020) had Republican mayors.” In other words, the red-state murder problem is really a blue-city governance problem. No wonder elected Democrats who have controlled these cities for decades want to deny that it is happening.

So if you’re hesitant to go on the subway, as the MSNBC reporter interviewing Hochul is, you are blinded by a “narrative” and not, ya know, reality. So bad is the Democrat messaging and action on crime that even people in far-left cities are demanding more police.

But the fear many Americans have of becoming crime victims is not just part of a “narrative,” and “flooding the streets with cops” sounds appealing to an increasing number of residents of cities such as San Francisco, Portland, Ore., Seattle, and Washington, D.C., where violent crime, homelessness, and open-air drug use have become the new normal. Telling someone who was just mugged or whose child just stepped on human excrement or a used needle at a playground that what they really need to be worried about is ending poverty is condescending, not to mention impractical. Most Americans would gladly like to help end poverty and crime; in the meantime, however, they want their families to feel safe.

It has not been a good week for the White House spin machine. On Friday, Biden said he was going to shut down coal plants in America and rely on solar and wind energy. Here’s a breakdown of operating coal plants in the USA: 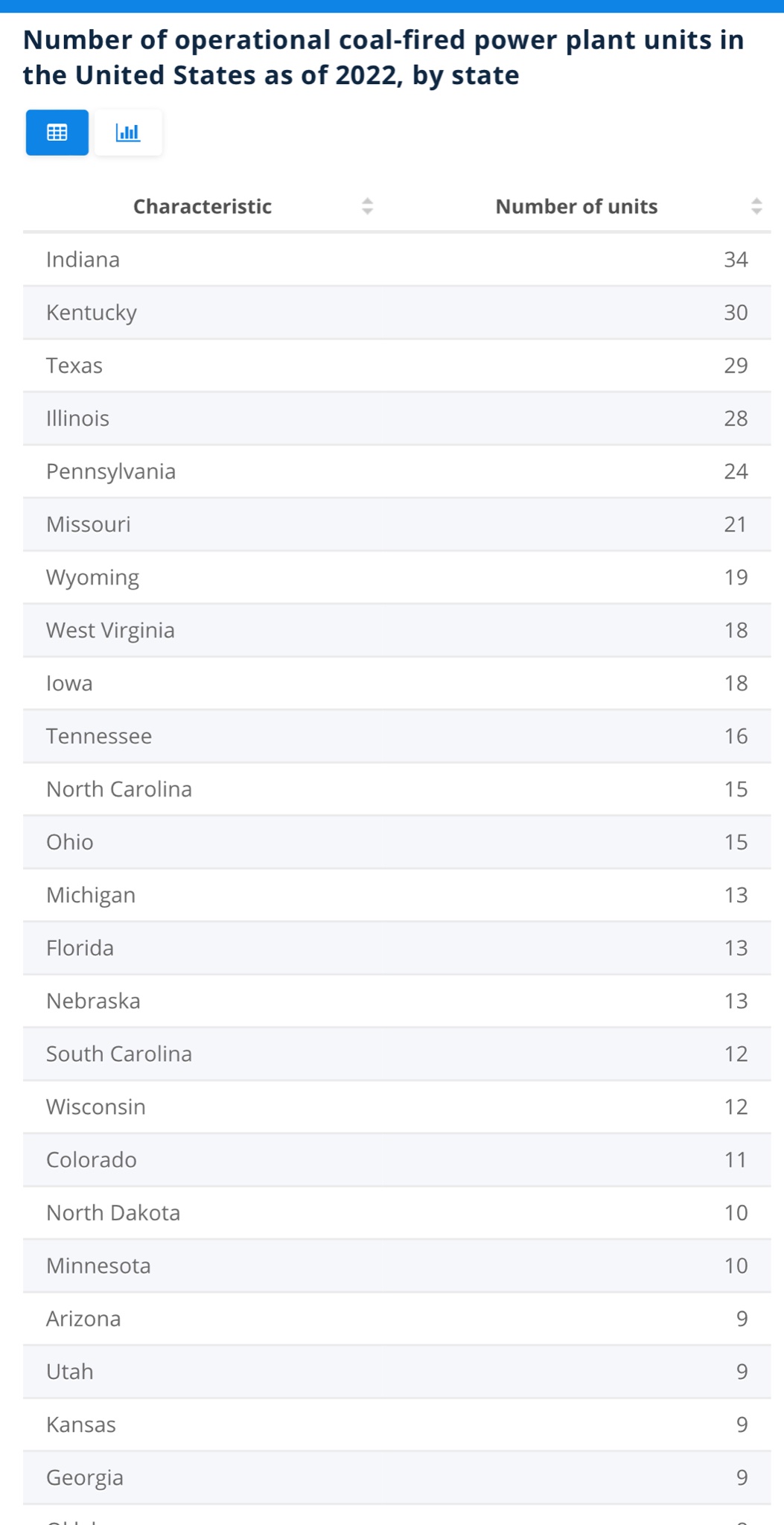 That’s a lot of jobs, and a lot of homes without reliable power as we head into winter. The White House Press Secretary, Karine Jean-Pierre, called reports of Biden’s very clear statement “twisted” and that Biden has been a big supporter of the coal industry. Gas prices have been high throughout Biden’s presidency, despite releasing almost 200 million barrels from the strategic oil reserve, a political bandaid on a bleeding artery. And while Biden begged OPEC to increase production to give him a political win, OPEC decided to cut production.

Like inflation and crime, the Democrat strategy is to deflect and blame. Price increases are the fault of Vladimir Putin and not Biden’s energy policy. But Biden and his handlers gladly take credit for modest drops in gas prices, as if the citizenry should bow down and thank him that we’re only paying slightly more than when the Mean Tweet Orange Man was in the White House.

The trans movement and the push to transition kids, teach kids about trans issues in elementary school, and remove parents from the conversation was a big reason Youngkin won in Virginia in November 2021. Instead of taking some time for introspection, the Democrats doubled down. While other nations are stopping transition programs for youth — citing ongoing mental and physical health concerns — the Biden administration doubled down on policies pushing transition on boys and girls.

Parents who questioned school boards over trans/sex curriculum were labeled “domestic terrorists” by the DOJ in collaboration with the National School Board Association. The “Pride Liberation Project” wants to “resettle” (read: kidnap) “trans kids” and “re-home” them with sympathetic people. A Virginia Democrat, Elizabeth Guzman, offered up legislation that would criminalize parents who did not affirm gender transition for their children. Such parents would face felony charges of child abuse/neglect and lose custody of their kids. Guzman panicked after the Republican-led legislature sent the bill to the floor for a vote.

Couple this with the too-long school closures, and it’s no wonder white suburban women are shifting to the GOP. So are Latino voters, who the left refers to as “Latinx” (despite being wildly unpopular with the Latino community).

America is not a democracy. It is a republic, a constitutional republic, so that California and New York can’t run roughshod over Kansas or Nebraska. Thank goodness for the foresight and intellect of our Founding Fathers! But the drumbeat of the Democrats heading into this election — wholly ignoring the economy, crime, and supply chain issues — has been “Democracy is in danger!” if people…vote the way they want to.

Biden gave a very vitriolic, divisive speech in front of Independence Hall in Philadelphia for “the soul of the nation,” in which he warned “MAGA Republicans” are a “threat to the foundations of our nation.” Backed by ominous red lighting and flanked by Marines, Biden scolded the nation for just not seeing how great things are with him at the helm. Less than 24 hours later, the backpedaling began as most Americans didn’t like being called a threat to America for voting. 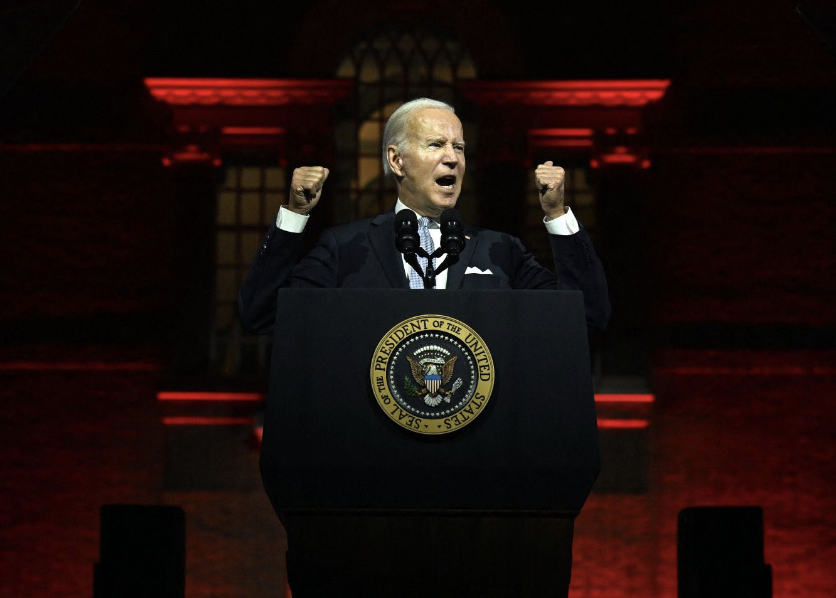 A few weeks later, 18-year-old Cayler Ellingson was run over by Shannon Brandt, a 41-year-old man who admitted the attack was politically motivated and that he believed Cayler was a part of a “Republican extremist group.” The media has been mostly silent on this, while they’re quick to blame the hammer attack on Paul Pelosi by hippy-commune-living, Castro district nudist on “Republicans.”

This division existed before COVID, but it definitely intensified during COVID. While most Americans were forced into lockdowns, and anyone who protested them was demonized in the media, Black Lives Matter protests were allowed. Cities burned, and few people faced consequences for their crime and destruction while the media sneered that the business owners “had insurance” and it’s just “property” and not really violence. Political leaders made you stay home, told you you couldn’t buy seeds or house paint or clothes, and forced you to mask up, but went on vacation, ate at swank restaurants, and rubbed elbows with celebrities while unmasked.

They shut down businesses, many of which never reopened, something that was predicted in May 2021. Restaurant traffic was 11% below April 2019 numbers well into 2022.

If you are more concerned about the price of your groceries than the farcical, pointless January 6 committee, you are just like the Nazis, and you are a threat to democracy, too.

And then they called for amnesty on COVID. Now, in fairness, Emily Oster was one of the more level-headed of the COVID people, so I liken her penning that article as taking one for the hardcore COVID team. The sacrificial lamb, if you will.

It doesn’t change the fact there can be no amnesty. What happened with COVID, and what is happening now, cannot just be forgiven or forgotten.

Things are bad. People are suffering. And the Democrats shrug and scream about abortion and democracy, while vilifying average Americans.

The red wave is coming. A tsunami, really.

And now, here’s some advice for the GOP:

As soon as you get a majority in the House and the Senate, every single failing of the Biden Administration will be blamed on you. Be prepared to counter this narrative.

Propose and pass legislation to help deal with inflation, crime, trans issues, energy policy and force Biden to veto it.

Fight, because the American people are suffering and deserve better from their leadership.

Fight, because it’s the right thing to do.