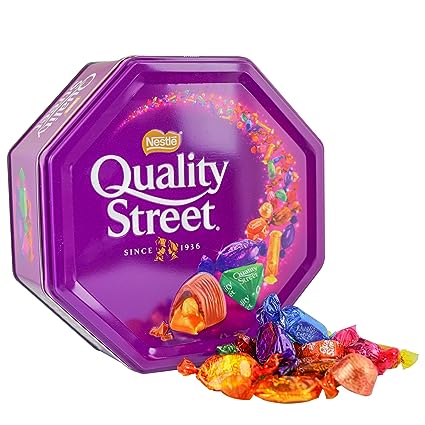 First they came for the meat: “A [London ] university has banned the sale of beef in campus food outlets in order to help tackle the climate emergency“; “Could Scotland Ban Meat? Parliament Considers Petition to Transform the Food System.“

But many of my neighbors raise and process their own pigs, beef, and chickens and are happy to share the results with me,  so I paid no attention.

Then they came for the soft drinks and the potato chips: “Promotions on food and drinks high in fat, salt or sugar (HFSS) in retailers will be restricted from April 2022, the government has confirmed today.“

But I almost never eat or drink such things, so I ignored it.

Then they came for the eggs: “UK egg shortage reported by suppliers as supermarkets keep quiet.”

But I have Mrs. Precious Ramotswe, Alakai Bekhi, and Co, who keep me well supplied, so I’m all set.

Then they came for the Christmas chocolates: “Shops BANNED from displaying junk food near entrances and tills from today.”

But I get my Quality Street fix** on Amazon, so I didn’t mind.

Then they came for the alcohol: “Activists seek to block Christmas displays of alcohol in the supermarket.“

THAT’S IT! Now I’m [expletive]! Where do I go to complain?

As goofy–some might say depraved–as this country can be/has become, we’re still not as detached from reality and the finer things in life as our friends across the Pond.

Not quite yet, anyway. **With the requisite supplemental order of “The Purple Ones,” of course.

(This post was inspired by a Telegraph article indicating that yet another of my childhood memories–Bonfire Night on November 5, together with its accompanying fireworks–will soon be consigned to the ash heap of history.

Councils and charities have called off some of the biggest and most popular Guy Fawkes parties. Some are blaming the cost of living crisis (Nottingham simply said it couldn’t afford the event’s £30,000 price tag) but others say that bonfires and fireworks just aren’t compatible with net zero and the fight against climate change. Manchester, Liverpool, Leeds, Glasgow, Cardiff and Nottingham are among cities that won’t be putting on official displays tonight.

Unsurprisingly, in light of the killjoy activities of the “authorities,” at-home sales of fireworks are booming (so to speak), up 50 percent from last year alone.  (Don’t expect such things to be permitted for much longer, either, She said….)

For a bit more on the history of Guy Fawkes and Bonfire night, and some of my own memories, see here: An Elimination Thought Experiment, Courtesy of Guy Fawkes.)