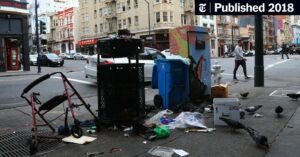 I doubt that the Pelosis spend very much time in this part of San Francisco.

The attack on Paul Pelosi has highlighted the consequences of Democrat policies on societies.  His attack was shocking because the wealthy rarely suffer the consequences of their preferred policies.  This has brought renewed charges of hypocrisy against Democrats.  The wealthy usually have security guards to protect them, personal assistants to shop for them, drivers to deal with transportation, and so on.  For these and many other reasons, social problems tend to have less impact on the wealthy than they do on the rest of us.

I don’t believe that this apparent dichotomy means that wealthy Democrats are hypocrites, though.  I sat down to write a post to explain this point, and I got a feeling of deja vu.  I went scanning through my old posts, and found this one, that I wrote four years ago.  The point of the post is that calling Democrats hypocrites is giving them way too much credit, and it ignores the true problems that we face.  See if you think this short essay from four years ago is relevant to current events:

Leftist Hypocrisy is Not Hypocritical Conservatives promote a type of government that they would like to live under: limited government, lots of individual liberty and responsibility, federalism, property rights, low taxes, freedom of speech, and so on.

Leftists promote a type of government that they want others to live under, but that they would not want to live under themselves: high taxes (for other people), limited freedoms (as long as we can do what we want), controls on education (although the wealthy can afford decent schools), limits on freedom of speech (for political opponents), high taxes on gas-guzzling pickup trucks (because leftists don’t farm, and they use public transportation). Etc etc etc.

But I really don’t think it is.

Conservatism is about the pursuit of happiness, for everyone. Equal opportunities, and restriction on the wet blanket of government. Freedom to think, speak, and live as you see fit. There are ethical, moral, religious, and practical reasons behind all this, but the hoped-for result is a better society for all.

Leftists are uncomfortable with the unpredictability of the crazy world we live in. Surely they could help people and prevent suffering if they could exert some control over the chaos of modern society. I think most of them have good intentions, even if their goals and tactics are, well, absolutely insane. Giving more power to fewer people has rarely worked out well in the past. But of course, we’re smarter now, we could do better. It’s hard for me to comprehend the arrogance required to think that centralized control systems can make things better for people. But gosh darn it, they keep trying, bless their hearts. This is why I don’t view leftists as hypocritical. It’s not about them. It’s about you.

You could call that philosophy a lot of things, but I don’t think you can call it hypocritical. We should just call it what it is: Tyrannical.

When conservatives accuse leftists of hypocrisy, they’re just being polite.

We should be less polite.

There’s a lot at stake. You can’t defeat an enemy that you can’t name. And control leads to tyranny, control is the enemy of freedom. We should fight the advance of tyranny with clarity. Not politeness.