Since my last list was such a hit, it’s only right it get a sequel. This time we’ll focus on those auditory oddities to darken your day, those musical maladies to frighten your friends (or should we say fiends?). Listen up, we’ve got a slew of tunes that will make you the death of the party.

Give it up to a Canadian to sound more country than the douches of the country top 40. Since he doesn’t restrict himself to the same three or four subjects, Lund can make a song about the honest work of digging graves and its paranormal hazards. That’s not his only seasonally appropriate song. The title “Gothest Girl I Can” speaks for itself.

Another Canuck outdoing American country artists. Though her music is usually appended with the “alt” tag, Ortega doesn’t really make spooky music. She does like to wear black veils like Lydia Deetz, though, and this particular song has “murder” and “crows” in the title, and she has skull makeup on in the video. It counts. There’s also a “witchy version” of her song, “On My Way to Hell”.

Siouxsie and the Banshees – “Halloween”

It might seem like cheating to choose one of the founding bands of goth rock until you realize their music may be moody and ethereal, but it isn’t the dark, vampire-obsessed stuff the genre is associated with nowadays. But c’mon, this one has Halloween in the title. Since this is a full-service post, here are a few more recs. “Israel” is their best song. “Desert Kisses” from their Kaleidoscope LP is a choice deep cut. Kiss in the Dreamhouse with its Klimt-inspired cover is a great album, as is Tinderbox.

AFI are shoo-ins. Singer Davey Havok had a tattoo sleeve of The Nightmare Before Christmas and used to sport “devil locks” like the Misfits whose “Halloween” they covered on their All Hallow’s EP from which this cut also derives. The EP also includes “The Boy Who Destroyed the World” which was on the soundtrack of Tony Hawk’s Pro Skater 3.

Mercyful Fate – “At the Sound of the Demon Bell”

What genre is more Halloween than heavy metal? You could choose any track from Denmark’s Mercyful Fate. With King Diamond’s falsettos and the incomparable duo of guitarists Hank Shermann and Michael Denner, MF made metal darker than the heavier and more extreme bands that followed in their steps. The first two LPs are mandatory, as is Abigail from Diamond’s solo project.

Deceased – “A Visit from Dread”

Moving to another metal King, we have King Fowley who has been in many bands, all of which could be featured on this list (one is even named October 31), but we have to go with his most famous, Deceased for whom he’s been a singer and a drummer since the 80s. Between Fowley’s near clean vocals and the band’s melodicism, Deceased stood out among their death metal peers including the Scandinavians touted for their melody. Their horror movie lyrics were never as hokey as those of the roster of Razorback Records or as overbearing as Mortician’s, and they took from a wide range of films, from Burnt Offerings (“Mrs. Allardyce”) to The Blair Witch Project (“Elly’s Dementia”) to the Zuni doll segment from Trilogy of Terror (“The Doll with the Hideous Spirit”) to a concept album inspired by George Romero’s Dead Trilogy (Fearless Undead Machines).

Though they were most famous for not being from LA, The Freeze deserve greater recognition for sticking it out far longer than their peers in the Boston hardcore scene. In 1999, they released One False Move with cover art by the most Halloween of artists, Edward Gorey. Most songs are about angst of one sort or another, but “Now Serving” is about cannibalism, even including (what I’m pretty sure is) testimony from the Jeffrey Dahmer trial. In ’83 they released “Halloween Night” on their Guilty Face EP.

No one embraces the true spirit of the holiday more than this psychedelic death/doom band from Detroit. Vocalist Shagrat has a perfect witch’s cackle (and he paints the covers of their and other bands’ albums) and Slasher Dave’s keyboards bring a touch of John Carpenter. “Mr. Beistle” is a tribute to The Beistle Company Halloween decoration manufacturer, “Trick or Treat” continues our trend of on-the-nose titles, but I decided to feature a cut from their newest album, Rot Among Us, released this month. It includes either a clip of the Crypt Keeper or someone who can does a bang-on impression. It also taught me the word deliquesce.

If anyone asks why you’re playing noise rock at your costume party, just show them the cover of Bad Moon Rising. Later reissues of the album included their single “Halloween” as a bonus track.

There you are, enough blood-soaked bangers to make a mix-tape that will bring down the house (the house of Usher, that is). What tunes tingle your spine? What ditties disgust and delight you in equal measure? Tell us below and may all your monster mashes be graveyard smashes. 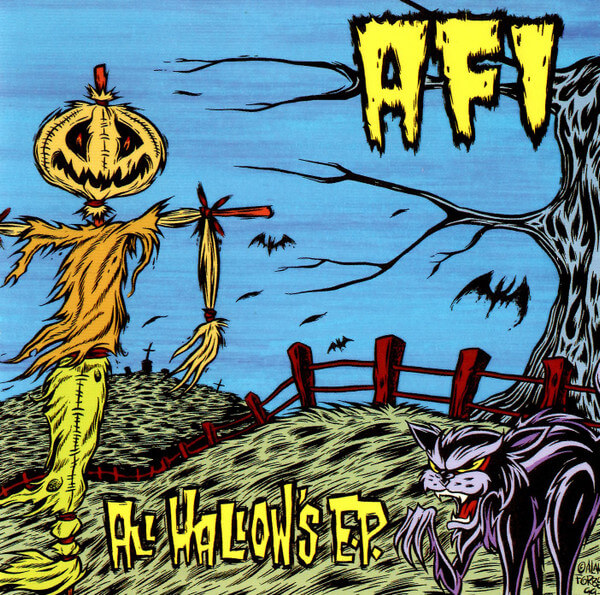