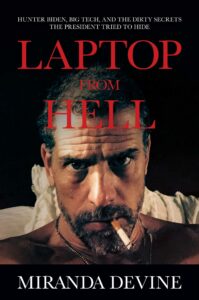 What are the odds Hunter Biden will be prosecuted for a single one of them?

Among those whose writings I try to read every time I see their byline — Roger Kimball, Victor Davis Hanson, Michael Anton, Molly Hemingway, for example — one of those whose work I admire greatly is Miranda Devine of the New York Post, who wrote the first account of Hunter’s laptop, infamously suppressed by Big Tech.

She has a story out this morning about a massive report on the “treasure trove” of criminality contained in the “laptop from hell,” which she describes as follows:

Right-wing nonprofit research group Marco Polo finally has published its Hunter Biden laptop opus, a thorough forensic examination of every document on the first son’s notorious MacBook computer that he abandoned in a Delaware repair shop in April 2019.

The 634-page report (plus 2,020 footnotes) lists six alleged crimes committed by Joe Biden – including tax evasion and violations of the Foreign Agents Registration Act (FARA) – alongside 459 crimes it alleges were committed by Hunter, including illegal foreign lobbying and money laundering.

Her brief column on this significant report can be found here; the report itself can be found here, in the event you’re searching for a “long (very!) read” for the weekend. As I have just seen the article, I note I have only scanned the first part of the report (Background-Motive, Timeline, The Four Families) and, based on that brief review, I can state it is overwhelmingly thorough and comprehensive.

Here is the gist of what I had planned to write some time ago about this most tawdry and sickening blight on our history; words that seem incredibly prescient now in view of this report:

What are the odds? Taking bets! Who thinks the Feds will actually charge just the charges he provably committed? Here’s another one: what about “The Big Guy”, the actual head of The Biden Crime Family? Will the Republicans impeach the most corrupt President in American history when they return to power? You would have to be Pollyanna to really believe that!

Here, as we consider these imponderables, it is appropriate to reflect on the immortal and beautiful words inscribed above the Main Entrance to the Great Hall of the United States Supreme Court and ask whether they have any real meaning anymore:

I have to believe we will return to our foundational doctrines; the only alternative is to admit to oneself that this greatest experiment in government of the people, for the people and by the people is a failure. While I’m not ready to believe that (yet), it is clear that we must stop the far-far-left, Socialist, Marxist Democrats before they succeed in destroying our beloved Nation.

Will they indict Hunter Biden on even a single one of those 459 alleged (have to use that word to keep the black helicopters off of the front lawn!) crimes?