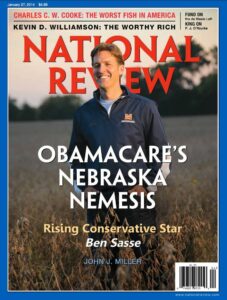 I remember the first time I met Ben Sasse, sitting and chatting next to him at a GOP fundraising breakfast in Virginia in June 2014. My former boss, retiring US Sen. Jon Kyl (R-AZ), introduced us. “He’s the real deal,” Kyl said. Coming from the highly respected Assistant GOP Leader, that meant something. I’ve long held Kyl in high regard as one of the most effective and intelligent Senators I’ve worked with.

The Harvard and St. John’s educated Sasse was the favorite of National Review magazine among US Senate candidates that fall, winning a cover photo. Then-42 years old, the bright, brash young conservative was seen as a potential presidential candidate.

The Ph.D. historian (Yale University) and, in his 30s, a successful college President (he turned around Midland University in Nebraska) immediately impressed. He homeschooled his children and wrote about their education, including detasseling corn. “Ben is focused on the future of work, the future of war, and the First Amendment,” his official website states. “He worries that the Senate lacks urgency about cyber and about the nation’s generational debt crisis. An opponent of perpetual incumbency, he has no intention of spending his life in the Senate.”

Sasse published two terrific books during his first term in the Senate: The Vanishing American Adult, about our new generation’s “coming of age” crisis, and Them: Why We Hate Each Other and How to Heal. I read and recommend them both as insightful, history-based, practical books devoid of the politics and partisanship featured in most other books authored by US Senators (exception: books by Sasse’s friend, Sen. Mike Lee).

But not long after Sasse’s quick ascent as a public figure, two things eclipsed. The election of Donald Trump and the pandemic. I might add a third — Congress’s and both the Trump and Biden administration’s reaction to it, hosing our economy with more than $9 trillion in new spending and sending our public debt soaring to $31 trillion. That must be a depressing and angering development for someone concerned “about the nation’s generation debt crisis.”

Perhaps unfairly, Sasse became known as a “never Trumper.” He was one of six GOP US Senators impacted by the events of January 6th at the US Capitol in 2021 who held Trump responsible and voted to impeach him. “This violence was the inevitable and ugly outcome of the President’s addiction to constantly stroking division … This is not how we peacefully transition power,” Sasse told Nebraska Public Media.

“As the attack Wednesday was ‘unfolding on television, Donald Trump was walking around the White House confused about why other people on his team weren’t as excited as he was as … rioters [pushed] against Capitol police, trying to get into the building,’ Sasse said. ‘That was happening. He was delighted,’” reported left-leaning HuffPost. “I believe the president has disregarded his oath of office,” Sasse told CBSNews. “He swore an oath to the American people to preserve, protect and defend the Constitution. He acted against that. What he did was wicked.”

Trump, as is his custom, denigrated Sasse, who himself has just been overwhelmingly reelected to a second term by Nebraskans, carrying every county in the Cornhusker State. YahooNews:

“He’s bad news, Ben Sasse,” Trump said in May. “He begged for my endorsement, the day after he started hitting me and we hit much harder than he knows how to hit. He’s bad news,” Trump said during a telerally held for Nebraska gubernatorial candidate Charles Herbster (R).

“Should have never given him the endorsement. He was horrible at the beginning. And then he was so good … and then the following day, literally, he started hitting back,” Trump added.

Trump endorsed the Nebraska Republican in September 2019, saying in a tweet at the time that he had “done a wonderful job representing the people of Nebraska.”

Sasse’s voting record was not only solidly conservative, but he also overwhelmingly supported Trump’s agenda in the US Senate. He also recoiled at the Democratic politicization of the January 6th attack to denigrate all Trump supporters. “I don’t think we should bundle together the hundreds of violent mob rioters of January 6 and the 74 million Trump supporters, even though a huge share of the latter category do still believe, you know, the untrue thing—the lie—that the election was stolen,” Sasse told NPR.

But it probably should surprise no one that Sasse cut his eight-year Senate career short for a return to academia, based on a timeline of his pre-Senate career. After graduation in 1994, his first job with the Boston Consulting Group lasted a year. His first political appointment as chief of staff to the Office of Legal Policy at the US Department of Justice also lasted a year. During that time, he commuted to his job from Austin, Texas, where he also served as an assistant professor at the University of Texas.

Sasse followed that up with six months as chief of staff to then-US Rep. Jeff Fortenberry (R-NE). In July 2007, he was confirmed as an Assistant Secretary for Planning and Evaluation at the Department of Health and Human Services. His job ended with the rest of the Bush Administration following the 2008 election.

A few months later, at age 37, he assumed the presidency of the failing Midland Lutheran College (which he renamed Midland University) in late 2009. It was his longest-tenured position – five years – until he won a seat in the US Senate.

As his books were published, Sasse was visibly and aggressively raising money nationally early in Trump’s presidency. I co-hosted a fundraising event for him in Philadelphia. Just before the 2020 elections, Sasse’s growing frustration with the Senate became evident in a provocative op-ed he wrote for the Wall Street Journal, “Making the Senate Great Again.” I’m guessing it didn’t sit well with most of his colleagues.

He called for “cutting the cameras” on the Senate floor and abolishing standing committees to return the Senate to its role as “the greatest deliberative body.”

He called for Senators to live together in a dormitory. “A lot of time is spent demonizing the opposition, but most senators can get along quite well,” Sasse wrote. Sen. Brian Schatz of Hawaii is as liberal as the day is long, but he’s my friend. Senators should live, eat, and meet in dormitories when the Senate is in session. It’s hard to demonize people you spend time with every day.”

He called for repealing the 17th Amendment to the Constitution, which provided for direct popular election of US Senators instead of via state legislatures as occurred before 1913 (I agree with him, by the way). He lamented the Senate’s inability to pass a real budget. He’s not wrong; Congress hasn’t adopted a real budget and passed all 13 major appropriation bills in time (before the start of the fiscal year) since I was Secretary of the Senate (not that I had anything to do with that).

Sasse also likely saw his path to higher public office cut short by his break with Donald Trump and changing political dynamics in the GOP. Legislative accomplishments and visibility waned, and reports of his growing disinterest in the Senate grew. At age 50, he’s making another career change. His seat will remain in reliably Republican hands, courtesy of an appointment by outgoing GOP Governor Pete Ricketts or his successor, Jim Pillen. Ricketts lost a race for US Senate in 2006 against then-incumbent Democrat Ben Nelson.

Sasse will soon finally be addressed as “Mr. President,” but perhaps not for the position he once envisioned. I think he’ll make a fine college president, perhaps not unlike Perdue University’s retiring Mitch Daniels. Some see Gov. Ron DeSantis’s conspiratorial hand in bringing a “never Trump” Senator to lead one of the state’s major universities, with 50,000 students. I still like Senator Sasse and wish him all the best.