I had planned my next Substack to be a follow-up piece to my rant on leaving New York City and discussing why progressives hate kids. However, an article in the New York Times grabbed my attention and I want to talk about it. 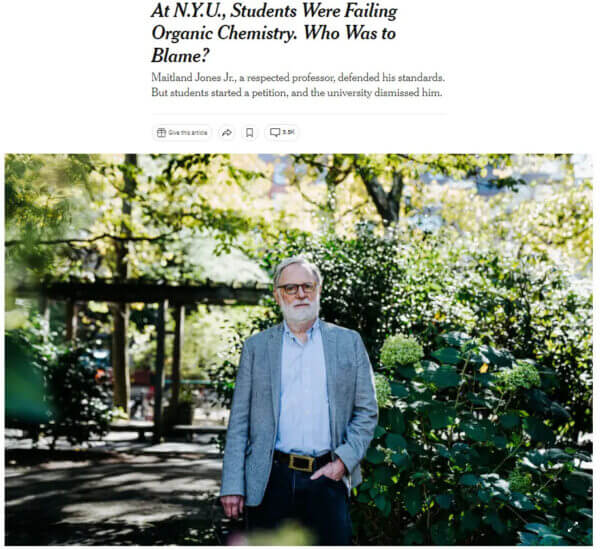 Since the New York Times is paywalled, let me first briefly summarize. The article, entitled “At N.Y.U., Students Were Failing Organic Chemistry. Who Was to Blame?” begins:

“In the field of organic chemistry, Maitland Jones Jr. has a storied reputation. He taught the subject for decades, first at Princeton and then at New York University, and wrote an influential textbook. He received awards for his teaching, as well as recognition as one of N.Y.U.’s coolest professors.

But last spring, as the campus emerged from pandemic restrictions, 82 of his 350 students signed a petition against him.”

Those protesting students claimed Dr. Jones’s class was just too hard and blamed him for their poor test results. Shortly before the beginning of the fall semester, Dr. Jones’s contract was terminated by the university. About 20 of Dr. Jones’s chemistry colleagues signed a letter, stating among other things, that the university’s actions could “deter rigorous instruction” and “enfeeble proven pedagogic practices.”

I wish to make four observations.

First, this article was on the front page of the Times. It wasn’t relegated to the metro section or hidden next to random education coverage. A relatively obscure 84-year-old semi-retired professor was pushed out by some whiny undergraduate students. Yet, this was deemed worthy of A1 placement by the New York Times’s esteemed editors. Why?

Is the Times, which has fully embraced anti-meritocratic, woke social justice ideology finally waking up to what is happening to our education system? Are they at long last realizing there is a story here and that our raging culture war isn’t simply a cause celebre of far-right fascists opposed to teaching slavery and Republican opportunists? Only time will tell. But perhaps a look at their comments section will help enlighten them.

As of my writing this, the article has received over 6,000 reader comments, more than any other Times article I remember seeing. Further, a quick glance at the most recommended comments are near unanimously supportive of the professor, unsupportive of the students, and show recognition of the dangers of grade inflation and the lowering of standards, especially in fields like medicine. To paraphrase one commentator, there’s nothing like the thought of not waking up on the operating table to mug you to reality.

Which brings me to my second, and most obvious observation. What kind of doctors are we going to have in this country? Anyone who attended a decent college knew that it was organic chemistry that ruthlessly separated the future doctors from those who wound up with Masters in Public Health degrees. Moreover, we’ve already seen a dramatic decline in the aptitude of our medical professionals in recent decades as our best and brightest now go into finance and tech, not medicine and science like in yesteryear.

Now, we’re seeing the fruits of social justice ideology infused into medical schools and pre-med programs, as standards dramatically decline for both admission and graduation. Once again, the blatant hypocrisy of progressivism is naked for all to see. How thoroughly equitable that the rich will be able to afford to import their qualified physicians from China and India while the poor and middle class will be stuck with the coddled midwits who had been given a free pass to and through med school?

My third observation relates to the damage we’ve done with our enormous overreaction to covid, which I discussed in my last substack.

“In the last two years, [test scores] fell off a cliff,” Dr. Jones wrote. “We now see single digit scores and even zeros.”

“After several years of Covid learning loss, the students not only didn’t study, they didn’t seem to know how to study.”

We have broken children not only socially but also cognitively. Contrary to the promises of public health officials and child psychologists, teachers unions and politicians, kids are decidedly NOT resilient. That many kids no longer have the attention span or ability to read or to study is far worse than a year of learning loss. We have destroyed a generation of children in what should rightly be considered one of the greatest human rights crimes in history, and have utterly mortgaged our future because of it.

Finally, we get to my fourth observation and the buried lede of the article:

“The entire controversy seems to illustrate a sea change in teaching, from an era when professors set the bar and expected the class to meet it, to the current more supportive, student-centered approach.”

Knowingly or not, the author of this New York Times piece has captured, in one sentence, the crux of our fight. We are fundamentally changing the mission of schools in this country. The switch from teacher-centered learning to student-centered learning is a many decades-long initiative of progressive education. But it has vastly accelerated in the past few years.

In a child-centered environment, what matters is that the student feels good, not that the student is learning and succeeding. The teacher is a friend, not an authority figure. Subject matter is dictated by the student, not the teacher, and certainly not what society has always deemed important. Here we see how toxic social-emotional learning supersedes reading, writing, and math instruction, and how good grades cease to be an indicator of mastery, but are given out like candy to prop up bruised egos.

In a nutshell, child-centered learning is the opposite of how humans have always educated their children and antithetical to creating a class of wise, informed, and resilient citizens.

More than anything else I’ve read lately in the media, this Times article about a canned NYU orgo professor encapsulates all in one piece the crumbling state of our education system, the hypocrisy of woke ideology, the cruelness and short-sidedness of our covid policies, and the obvious danger to our future society. I can only hope that more Americans will begin to wake up, as just perhaps the New York Times has.

I also want to share with you the latest episode of the podcast I co-host with Beth Feeley, Take Back Our Schools here on Ricochet.

Courage is a Habit

On this episode of Take Back Our Schools, Beth and I talk to fellow parent activist, Alvin Lui. Alvin is the founder of Courage Is A Habit, an organization that creates tools and strategies for the average parent, school board candidate, and legislator to take action in defending children from indoctrination in K-12. Alvin discusses his organization’s work exposing aspects social-emotional learning (SEL) in our schools and explains how SEL is a gateway to teaching critical race theory (CRT) and radical gender ideology. Alvin also tells about his widely-shared expose on the American School Counselors Association (ASCA), an organization that is training school counselors to indoctrinate children towards CRT and the transgender cult. Finally, Alvin shares his views on what local parents need to do to make a difference in their own children’s schools.