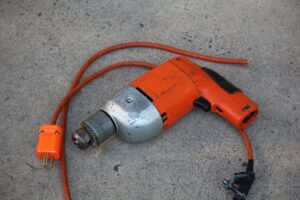 Today I am disposing of my Father’s drill. There is nothing special or unique about it, but it has been around almost as long as I have, with a lot less complaining. I hate to see it go.

It reminds me of my Dad, my childhood, the ranch where I spent my earliest years, and a world that was about to swiftly change in unexpected ways.

Dad bought it sometime between 1967 and 1975. That was after my Grandpa died and before the ranch was sold. My age was in the single digits. I wasn’t there for the purchase, but I distinctly remember seeing the drill for the first time in the tool shed. The tool shed was built from adobe blocks, with clapboard siding and covered by a tin roof. Half of it was partitioned off for Grandma’s chickens.

The drill was bright orange! To my eyes, it glowed. I spent a lot of time shadowing Dad while he worked and I was familiar with his tools. They were all made of steel and sometimes wood. A few were shiny. But this was the first tool I had seen with such vivid color and it made a strong impression. It was a Black and Decker with a partially plastic body and the now familiar color scheme. I don’t think we had anything so brightly colored, even in the house, much less the tool shed. In that small shadowy building, surrounded by rust, dust, and wood shavings, I had never seen anything like it. But it was the first of many plastic products that, over time, made things cheaper, lighter, and certainly more colorful.

Dad used that drill for the rest of his life. I have used it for many years. The power cord has suffered multiple injuries. I dropped it on a frosty morning a while back and broke the handle. Some epoxy and a Kydex patch kept it going. But a couple days ago, it began to have problems – it only ran when held at a certain angle. It seems to have a broken wire in the base of the cord, or maybe in the handle. I switched over to the new drill and kept working and could immediately see that the newer, more powerful drill really was a much better tool.

I fiddled with it a little bit, but it’s not worth a lot of effort. I have two much better drills. So I’m going to toss it. It’s difficult because I don’t like to throw away things that date to my childhood.