In July, we took a road trip from Los Angeles to Anacortes, WA. Taking the inland US-395 route, our first day took us to Reno, NV, and our second to John Day, OR.

John Day is a nice small town in eastern Oregon, just over halfway through the state, going north on US-395. John Day and the John Day River are named for a hunter from the backwoods of Virginia who was attacked by Indians near the mouth of the Mau Mau river in 1812. He survived the attack and people started calling the river the “John Day River.” It is interesting to note that he spent no time near where the town of John Day is today.

We arrived in late afternoon, checked into the Best Western John Day Inn, and started to think about dinner. We were lucky, the Outpost Pizza Pub & Grill was just a couple of blocks away. I had an interesting chicken dish they call Alice Chicken. It was grilled chicken topped with bacon, mushrooms, cheese, and a sauce. It was pretty good.

We were up early the next morning. After the hotel-provided breakfast, we headed east out of town on US-26. US-395 turned north in Mt. Vernon and we left it behind. Our destination for the day was Bellevue, WA, but on our route is the John Day Fossil Beds National Monument. The national monument has three fairly widespread units in central Oregon. Our route would take us by the Sheep Rock Unit.

We turned off of US-26 onto Oregon 19, about five miles east of Dayville. We had a nice 20-minute stop while the highway repair crews ferried us through a very long stretch of one-lane road as they were repaving. Oregon 19 follows the John Day River through a very pretty canyon. After a few miles, we came to the Thomas Condon Paleontology Center, one of the major facilities in the national monument.

Unfortunately for us, the center is closed on Mondays. We continued our drive north and stopped at the Foree Picnic Area. There are two short and easy trails here, the Flood of Fire trail and the Story in Stone trail. These trails, both less than a half mile (one kilometer) round trip, take you up the hillside into some interesting rock formations.

The hills above the John Day River Valley are impressive. They are capped with a layer of lava that was laid down in a large eruption near Burns, OR, 7 million years ago. This layer is known as the Rattlesnake Formation. Click on any picture to see a full-sized image. 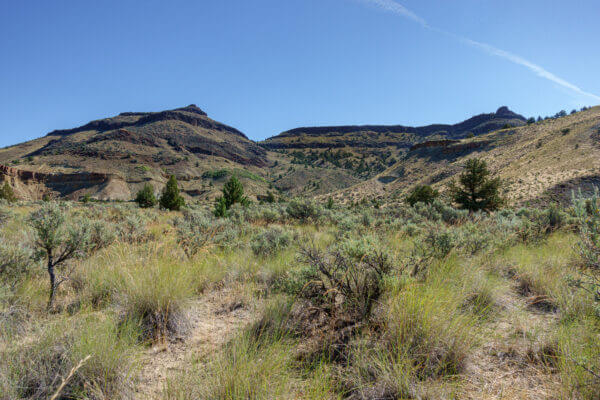 The path is paved and not particularly steep. 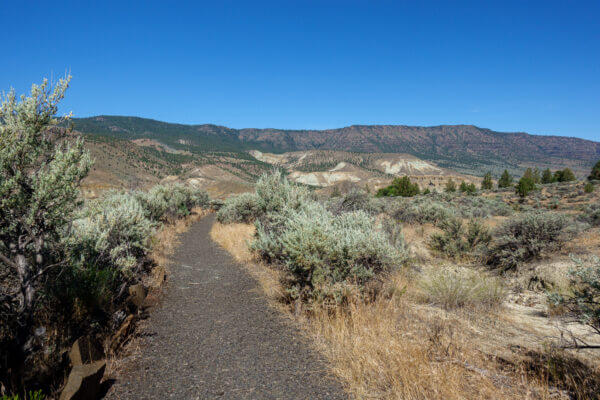 An easy trail amongst the rock formations

Looking across the valley to the west, you can see blue-green claystone formations in what they call the Turtle Cove assemblage. The claystone was formed from superheated gases, ash, and pulverized rock that came from volcanoes to the west. This fine-grained sedimentary rock is a source for many fossils. We stayed on the path. 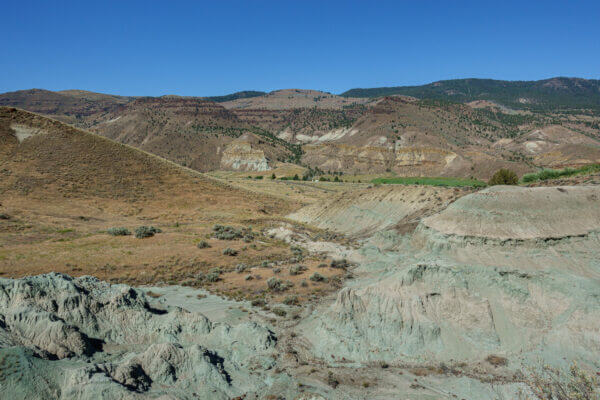 Looking across the green claystone formations toward the John Day River.

The weathering formations are quite interesting. 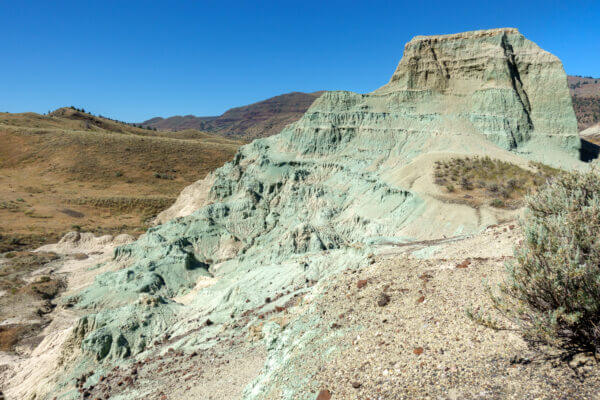 A large outcropping of blue-green claystone

At the end of the trail, there is a large eroded area that is quite pretty below the lava-capped side of the valley. 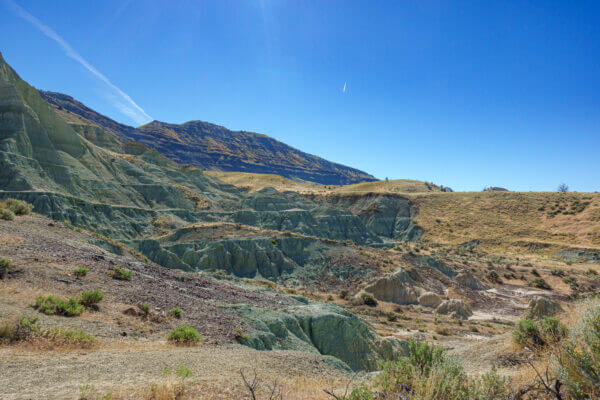 Looking south across the eroded soil as a plane flies overhead

They make sure you know you have reached the end of the trail. 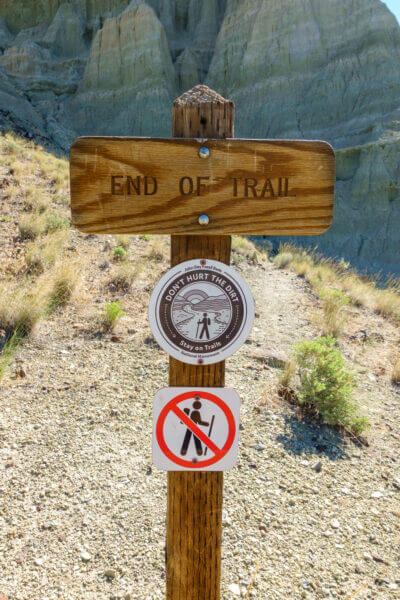 In case you were lost, they let you know you’ve reached the end of the trail.

The view from the top of the trail is quite nice.

A panorama shot looking west from the top of the trail

After our little hike, we continued north on Oregon 19. It is a very pretty drive, first along the John Day River, then turning north through a forested area before emerging on the basaltic plateau of north-central Oregon. We only saw other cars about every 15-20 minutes — that is my kind of drive. From the plateau, you can see the massive volcanoes of the Cascade Range.

After turning west in Condon onto Oregon 206, we had great views of four volcanoes. But which was which? We then came across the Mountain Identifier. This round concrete slab has plaques on it identifying the mountains. 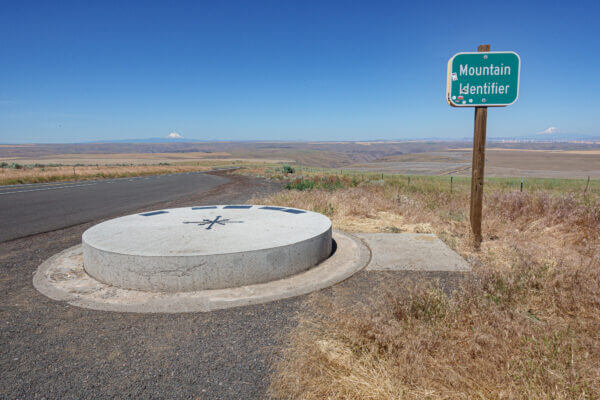 A handy guide for identifying mountains

The plaques in the cement identify the mountains and provide their height.  For Mt. St. Helens, it provided its height both before and after its huge eruption in 1980. 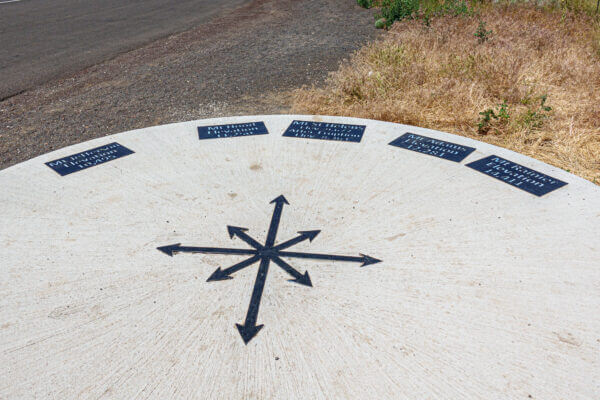 Details of the mountain identifier

From there we went north, picking up US-97 in Wasco. We crossed the Columbia River at Biggs Junction, met up with Interstate-82 in Yakima. We merged onto Interstate 90 in Ellensburg and reached Bellevue by mid-afternoon.