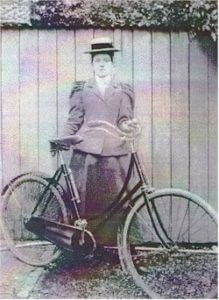 Today, September 30, 2022, is the fifteenth anniversary of my father’s death.  He’s been the genius behind a number of my posts, so today I thought I’d let him speak for himself.  Not (as has often been the case) as a Colonial Officer in Nigeria, somewhere between 1948 and 1963, but as a son and member of a remarkable family that’s left its imprint on us all:

After Charles Muffett [my Grandpa Muffett] married Mary Louise Stoddard in the chapel on Graham St on December 26, 1904, they spent their honeymoon in London, where they went to see Oscar Wilde’s Lady Windemere’s Fan (considered by mother to be very risqué!) They also witnessed a very large fire, with many engines deployed to put it out.  This made a very great impression on mother too.

As a woman earning her own living, although still living at home with her parents, Mary Louise Muffett (as she had now become) was, indeed, extraordinarily emancipated. She always claimed that she owned and wore the first pair of ‘bloomers’ in Birmingham, for she was a very keen cyclist and had attended “Professor Hubbard’s Academy for Young Lady Bicyclists” in Bingley Hall in order to learn how to mount and dismount with due modesty and decorum.

Her enthusiasm for cycling was shared by her husband-to-be.

Indeed, she was fond of recalling that when they left to go on their honeymoon the wedding guests, knowing of this double addiction, all sang the current music-hall hit:

with great emphasis on the bit “For you’d look sweet/Upon the seat/Of a bicycle built for two!”  So it must have been quite a bibulous occasion, which for a “Chapel” wedding was quite unusual and would doubtless have gratified Charles James [Great-Grandpa Muffett, a notorious imbiber], had he been present.

Charles [Grandpa] Muffett did a stint at Icknield Street, as what might be styled these days  a “management trainee” but which was then called an “apprentice.” During this time, he also traveled widely on behalf of a wholesaler of sausage and seasonings.  [My Uncle] Maurice said that mother told him that, when traveling and–as frequently happened–being offered a drink, father always refused the drink but said, “I will have a cigar with you!”

By 1909, the happy couple had returned to Birmingham, where father became the manager, and later Managing Director, of S. Ward Ltd (Est’d 1842), Ham and Bacon Curers, Melton Pork Pie and Cambridge Sausage Makers, of 222 Broad Street.

One of my proudest possessions (I don’t have many this side of the pond) is Grandpa Muffett’s oak roll-top desk from this time.  Not to mention the S. Ward Recipe Book. 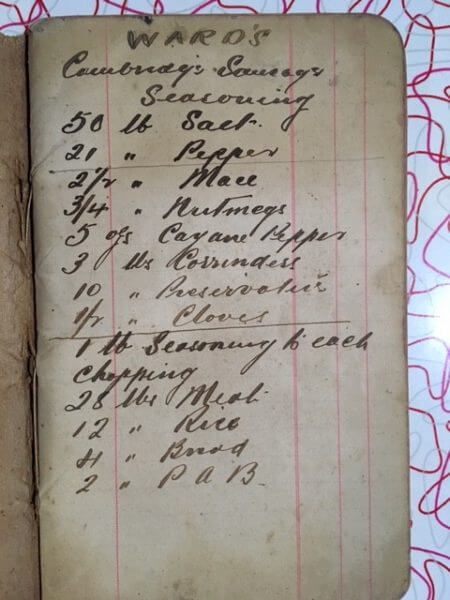 I’ll claim, with thanks and appreciation the “extraordinarily emancipated” tag as it has applied to the women in my family, and as it might, in the final analysis, apply to myself. Lord.  I pass no comment (today) on why it appears that so many women who object to the idea of “emancipated” women seem to hate their sistern and would like to recall our ability to speak for ourselves.  You do you, K?  And we’ll see who wins out.

I don’t remember anything about Grandpa and Granny Muffett, other than that which has been told to me by their six children, the fifth-youngest of whom was my father, among a vanishingly few mementos of their lives. (Ask me about the shotgun.  Please.)

And I know that I–and my siblings–are doing our best to hold up the deal, even today.

That same today, the only living remnant of those days is Auntie Pat, 99 years old and I wish she could live forever.