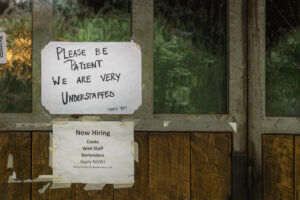 Suddenly America is facing a severe structural labor shortage. We all feel it, whether we’re trying for reservations at a restaurant that has reduced hours, seeking handyman help, or just trying to get somebody to answer the dang phone.

Nurses and teachers are in short supply. Employers report at least two job openings for each job seeker. Beyond personal inconvenience, when workers produce fewer services and goods for dollars to chase, prices go up, and inflation results.

You can partly blame it on Covid. Politicians shut down much of the economy, then shoved trillions of dollars in “Covid relief fund” to those forced not to work.

Unfortunately, the spigot was never fully closed and many Americans found that sleeping-in agreed with them. Europe, Canada, and Japan all rebounded while the US was left with about one million fewer workers.

Adding to the problem, the youth anti-work movement continues to grow. Work is for suckers and victims. Social media outlets praise workers for quitting their jobs. Others are lionized for being “quiet quitters,” idlers who do the least work possible while still collecting a paycheck.

The inspiration for the anti-work cult traces back to the Marxist anti-capitalist movement, a long-time foe of the American work tradition. Their thesis is that capitalist employment is exploitive and, therefore, not working is virtuous.

It coincidentally turns out that, for many Americans, government policy has significantly disincentivized work. Working harder is no longer for them the way to get ahead.

Writing in the Wall Street Journal, Phil Gramm and John Early explain how this effect is commonly underestimated, because of the way income is reported by the federal government. The Census Bureau, inexplicably, does not treat most transfer payments as income.

That’s important because government transfer payments to the bottom 20% of households, income-wise, ballooned by 269% between 1967 and 2017, while the middle 20% realized only a 154% increase in their after-tax income.

The results were staggering. In 2017, the bottom 20% of households had $6,941 in “income,” and only 36% of working-age people actually worked. However, after the transfer payments and taxes are included, as they should be, their total income was $48,806.

The second to the bottom quintile had 85% employment and an average total income of $50,492, actually less than a $2,000 difference from the lowest group. The middle quintile was 92% employed and earned $66,453, but after taxes and transfers, that shrank to 61,350, merely 26% more than the bottom quintile.

Sorry for all the numbers, but they tell an important story. For 60% of Americans, working much harder and even earning more money produced a negligible net benefit. Means-tested government programs were just as lucrative. It’s not hard to understand why the percentage of working-age people in the lowest quintile who were employed fell from 68% in 1967 to 36% in 2017.

Policymakers seem to believe that incentives don’t matter, but they do. People who choose not to work and live off the labor of others earn some understandable resentment, but they’re not acting irrationally under the circumstance. The heart of the problem is their enablers in Big Government who, for their own political purposes, created this perverse system.

It’s often forgotten that in the 1990s, governments established work requirements for many means-tested benefits. “Workfare” was a generational policy success. In spite of hysterical warnings that “children would starve in the streets,” poverty rates dropped as employment increased.

Unfortunately, the advocates for workfare declared victory and move on. But welfare bureaucrats stayed put, patiently reestablishing their vision of welfare without requirements. So now poverty is supported rather than reduced. Arizona was among the states that quietly removed the work requirements for Medicaid and other welfare programs.