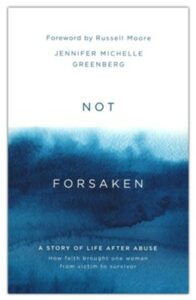 Over the last couple of years, I’ve followed the Twitter account of Jennifer Michelle Greenberg. She’s a Christian woman who grew up in an abusive home. Her father claimed to be a Christian but abused Jennifer physically, sexually, and emotionally. She experienced churches that would ignore or minimize abuse. She now works to help survivors of abuse and help churches to deal with such issues Biblically.

I just finished her book Not Forsaken: A Story of Life After Abuse. I found these definitions helpful. She has dealt with people who demand that abusers must be forgiven (7 x 70) and allowed to remain in one’s life. I found her distinction between two kinds of forgiveness helpful:

Boundaried Forgiveness is when we let go of our anger, resentment, and desire for revenge; yet we maintain boundaries and pursue justice. We don’t not bear a grudge, but we may file a police report or get a restraining order…

Reconciled Forgiveness is only the ideal when our abuser is genuinely repentant.

I hope others find this helpful as well.

(September Quote of the Day)