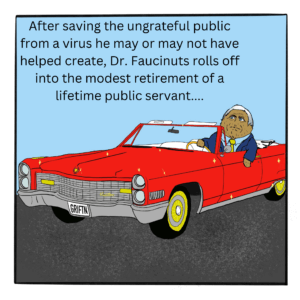 Safe and effective are terms that should not be debatable but here we are. Recently the FDA has approved the use of the reformulated MRNA vaccines, which they are calling bivalent vaccines. These new versions have been modified to contain a more omicron-specific antibody. Since they are using the same manufacturing process, the powers at be feel comfortable pushing ahead with this product despite a lack of human trials.

Strangely enough after approval of the new versions, word came down that the older versions could no longer be given legally as a booster; which is quite the pivot. Availability of the new products has been haphazard; we quickly used all the Moderna that we were given and had only Pfizer for a while. Most patients who desire it have no problem mixing and matching after all the products are so similar that Moderna is currently suing Pfizer for patent infringement.

Rushing another product to market while stating there is no time for trials certainly raises a few eyebrows. Clearly you would not need to reformulate it if any of the original claims held up. The vaccine narrative has shifted from the ironclad “you cannot get Covid if you are vaccinated” to the arguable “well, trust me, it would have been worse without it.” The most disturbing part of this entire fiasco is that we have given millions of doses of an experimental product and have no control to compare the results to. Even in the trials, the threat of the virus was deemed so high that it was unethical to even continue the control group. From a research perspective, it is impossible to explain how great this sin was, and it will keep graduate students busy for a long time to come.

If you had spoken with me prior to Covid, you would have found no fan of the FDA. It is a bloated, bureaucratic organization filled with doctors who do not practice and are instead paid obscene amounts of money to promulgate excessive rules and regulations that stand in the way of novel treatments and therapies. For most of my life, the FDA was far too conservative, in my opinion, when it came to approving new products. This did not happen by accident. There are good historical reasons why the FDA would err on the side of caution with loads of regulations stacking up over the years only to be ripped off like a band-aid due to the ongoing national emergency declaration.

The most well-known is thalidomide, the notorious drug given for morning sickness all around the world that would cause widespread and horrific birth defects. In the only bright spot in history for the FDA, thalidomide would not be approved for morning sickness. While the organization has taken credit for this over the years, the truth is that the decision not to approve the drug was due to a single employee Frances Oldham Kelsey and a stroke of luck. She would bravely stand up to the drug company Richardson-Merrill which was infuriated that she would hold up their drug that had already received approval in forty countries.

Kelsey had read about neurological toxicity in adults taking the medication in the British Medical Journal and correctly had legitimate concerns about how this toxicity would present itself in the fetus of a pregnant woman. To defend themselves, the company pointed out that it was certainly safer than barbiturates which were already approved. The antagonistic relationship between Kelsey and the drug company back then stands in stark contrast to our present situation, where the FDA co-owns the patent and is less a regulator and more a business partner.

So, what was the stroke of luck? This was only the second approval her team was assigned, which fortunately left enough time for her to review and deny the application. Kelsey would admit in her memoirs that, as work would pile up, many drugs would be automatically approved simply because they were unable to review them in the allotted two-month period! Ironically, thalidomide would eventually receive FDA approval in 1998 because it is quite safe when you are not pregnant and has other uses. 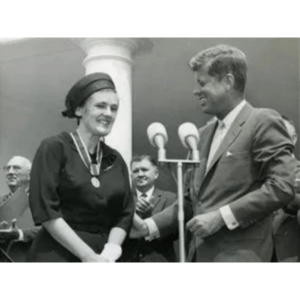 Dr. Kelsey would be hailed as a hero and given the President’s Award for Distinguished Federal Civil Service in 1962. Legislation would be passed that assured no drug would be sold without first obtaining the agency’s approval. Kelsey would be first put in charge of the Investigational Drug Branch and later would develop the Division of Scientific Investigations, which was tasked with inspecting clinical sites for integrity. She would pass away at the ripe old age of 101 in 2015; thankfully, before she could live long enough to see her life’s work simply disregarded.

The MRNA vaccines, like many other therapies, are great tools that we have unfortunately used with the finesse of a monkey with a hand grenade. Like opiates and benzodiazepines, their overuse has created a set of unique problems and concerns. Hormone blockers like Lupron are interesting drugs that, in saner times, the general public would not even know existed. Instead its use is trending in teenage girls. The story is always the same and the “let no crisis go to waste” mantra applies here because this emergency has allowed for the removal of safety regulations that lobbyists could only dream of.