Don Lemon of CNN recently pontificated on the need for slavery reparations to be paid by the British Royals. He was immediately countered by Hilary Fordwich, who responded that those who want reparations should look to African slavers, who she characterized as “the beginning of the supply chain.”

Ms Fordwich concluded, “I think you’re totally right. If reparations need to be paid, we need to go right back to the beginning of that supply chain and say, ‘Who was rounding up their own people and having them handcuffed in cages. Absolutely, that’s where they should start.” 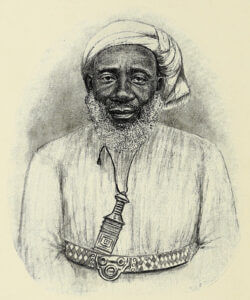 I recently read the memoirs of Hamed bin Muḥammad, widely known as Tippoo Tib, a curious nickname that probably referred to a propensity to blink. He wrote in his native tongue of Swahili and his manuscript was then translated to German and published.

He was born about 1837 on the island of Zanzibar with mixed Arab/African ancestry, although he considered himself an Arab. He operated in what became German East Africa and the Belgian Congo. Today we know those countries as Tanzania and the Democratic Republic of Congo.

Until the European colonization of Africa took hold in the late 19th century, East Africa made the “Wild West” look tame. One could do whatever one was big enough to pull off, and for the fearless there were fortunes to be made. An enterprising man who could scrape together bearers, trade goods, arms, and resolve could explore the interior and hopefully return with enough slaves and ivory to make a fortune.

Tippoo Tib describes trading for staggering amounts of ivory which had little value to the natives. He doesn’t say much about slave trading, understanding clearly that most Europeans who would read his memoirs strongly disapproved. Nonetheless, slave trading is what he was famous for.

The preface to the English edition of Tippoo Tib’s memoirs was written by Sir Charles Eliot, who served as a diplomat and colonial administrator of British East Africa, which included the mainland dominions of the Sultan of Zanzibar, 1900-1904. Eliot would probably be held up as an evil colonialist nowadays. In any case, he knew Tippoo Tib and years later wrote the following unflattering comments in the preface:

“The name of Tippoo Tib is familiar to all who took an interest in the affairs of East Africa or the Congo… He was the most remarkable of the band of Arab traders and explorers who, starting from the East Coast, penetrated to the Congo, and were the rulers of whatever country they happened to be in, though they established no states and did not even claim the right of conquest on behalf of their sovereign, the Sultan of Zanzibar. It is curious to notice how much and how little they affected.

The whole history of the Arabs in East Africa shows the same characteristics. They founded their cities on the coast but made little effort to move inland, and in the rare cases where they did so, as at Tabora and Ujiji, the reason was simply that their slave raids had depopulated the region near the sea, and they were forced to move on to distances where the game was not so shy.

The chief objects of these expeditions were slaves and ivory. Ivory was plentiful, and the natives, who had often no notion of its value, were ready to sell it absurdly cheap. If they made difficulties, vigorous measures were adopted without scruple or hesitation.

These pages, based upon his own statements give some inkling of the unscrupulous cruelty with which he dealt with natives, and clearly much remains untold. In excuse, one can only say that the cruelty of the slave-traders was not greater than the cruelty of the natives to one another. One eminent Arab, when criticized by Europeans for his slave-trading propensities, used to relate how he had fallen in with a tribe who were accustomed to eat their prisoners of war. He bought all these prisoners for a small sum, and made them his slaves, which he maintained, with a logic difficult to controvert, was far better for them than the other fate. Still, no doubt Tippoo Tib’s commercial journeys were in the main plundering expeditions…But he was intelligent and not wantonly brutal…

…he was always friendly to Europeans. By the assistance which he rendered to them he indirectly contributed in no small measure to the civilization of Africa, for which the Arabs themselves have done so little.

The island of Zanzibar was the center of East Africa slave trading. It was controlled by the sultan who amassed great wealth taxing the slaves, ivory, and other trade goods that came through the area, until the Europeans put a stop to it. They were determined to stamp out the slave trade but their actions generated conflict with many indigenous chieftains.

I once read an account, which I can no longer find, of an English woman being rowed across the harbor at Zanzibar. The water was clear and she was able to see to the bottom. She remarked that the sea floor was covered with white rocks. She was dismayed to be told that in fact she was looking at the accumulated bones of slaves who had died on the ships and had their bodies thrown overboard.

There is a short but very good article here that provides a photo and information. It records that in 1891-2, Tippo Tib sold “3800 male slaves and 800 women to the Congo free state. They were to be freed but had to work as rail-road labourers and soldiers.” Several internet sources say that by the end of his life, he owned many plantations that were worked by 10,000 slaves.

So that is one, but not the only, beginnings of the slavery supply chain in Africa.