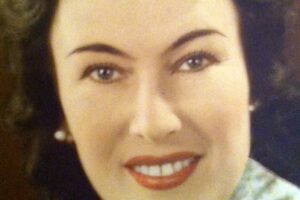 How is it, that Margaret Thatcher can be the first woman Prime Minister of the United Kingdom, and almost a decade after her death, today was the first time I am hearing this story?

Margaret Thatcher was once asked what her greatest achievement in life was — the one thing of which she was most proud:

In 1938, a 17-year old Jewish girl, Edith Muhlbauer (pictured), wrote to Muriel Roberts, Margaret’s older sister, asking if their family might be able to help her escape Hitler’s Austria. By this time, the Nazis had already begun rounding up Vienna’s Jews after the Anschluss.

Alfred Roberts, Margaret’s Father, simply did not have the means to help Edith escape to England. Margaret, then 12, and Muriel, 17, set about raising money in Grantham, literally knocking on doors.

The money was raised, and another Jewish life was saved.

I can help but believe that had Mrs. Thatcher been a liberal or a socialist, there would have been movies made about the little girl who saved a Jewish family from the Nazis, released to help with her first election campaign. Instead of just a few newspaper clippings from Israeli newspapers.

She was rightly proud. This is why the Lady was not for turning, she knew the hard work it takes to change the world – even if just one life at a time.