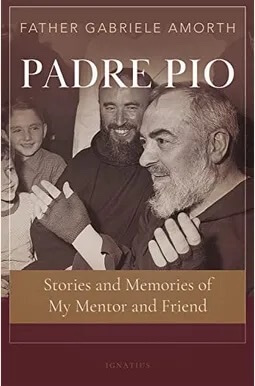 The late Father Gabriele Amorth was a protege to Saint Pio, the phenomenal figure who lived in a remote Italian monastery and who drew the umbrage and awe of bishops and cardinals. Accused of drumming up publicity for Padre Pio’s “act,” the monastery took extensive measures to discourage those who came to confess to the padre and attend his renowned masses, Latin, of course, which sometimes ran as long as four hours and which convinced many attendees seeing the ever-bleeding wounds on his hands and the depths of passion he brought to these occasions.

He spent years confined to his cell, by command of his bishop under the authority of ecclesial obedience. The Padre accepted his punishment and suffering as the will of his Lord and endured. Father Amorth wrote a biography of Saint Pio before he died, and St. Ignatius Press published an English translation in 2021.

It is a humbling thing to read. We live in a vestigial Christendom where, if the sacrament of confession is observed at all, it is likely to be entirely private, in a moment of silence and reflection before the absolution of the assembled en masse. When one understands Saint Pio’s gifts and his career, this modern adjustment comes to be seen not as an innocent modern streamlining but as a horrific crime against the congregants’ needs for spiritual development and sanctification.

To appreciate the Padre Pio phenomenon, I give you Father Amorth’s recollection of those days:

“How cold it was in front of that church! I was to suffer that cold many more times, with no shelter from a wind that whistled through the rocks on the hillside. I remember one winter when we stood huddled together like sheep, hoping in vain that the friar sacristan would have pity on us and open a bit earlier than usual. Not a chance.

Once inside, I hurried with the other men to the sacristy, behind the main altar. The Padre had already come down and begun to vest himself slowly for Mass, assisted by his spiritual sons who were already practiced in this and by a Capuchin friar who acted as his assistant. When he was vested and had the sleeves of his alb almost covering his hands, he took off the fingerless gloves, with that friar at the ready to secure them in his satchel.

“After a few minutes, the little church was full, so the main altar had been prepared for the celebration. Padre Pio usually celebrated at the side altar dedicated to Saint Francis. I was one of those who received Communion from the Padre, and I remember his attentiveness but also his fatigue on account of that Mass, which lasted an hour and forty-five minutes. After a brief thanksgiving came the confessions of the men in the sacristy, then of the women in the church. At the very end, I saw everyone lining up on both sides of the corridor that the Padre would pass through on his way back to the friary.

He walked past slowly, while everyone tried to kiss his hand or to place it on their heads in a gesture of blessing. And at the same time, there was an uninterrupted chorus, as he neared the door: “Padre Pio, pray for my son; he’s dying”; “Padre Pio, I’m losing my eyesight; pray for me”; “Padre Pio, I had an accident at work; pray that I may be able to go back”; “Padre Pio, my wife has a fever that the doctors do not understand; pray . . .”

“When he got to the door, Padre Pio turned around, gave a blessing with broad gestures, and went back to the friary. On one of my subsequent visits, while he was turning around to give the blessing, I heard something that must have come forth from him a number of times, because I have also read it in some of his biographies: “All have their cross; all ask that it be taken away. But if they knew how precious it is, they would be asking that it be given to them.”

His life was one of illness and pain, but he believed that in the suffering we can find the Divine.

It was never a given when one got into the long line, rock concert ticket wait times, to confess to Padre Pio that one would be absolved. Or even seen. In one instance, Pio told an assistant to dismiss a woman waiting in line. She was so immodestly dressed that her ankles were showing. Saint Pio’s gift of seeing the sins and the conscience of those confessing obligated him to reject the false confession and counsel the subject on how to properly discern their conscience.

I have often thought that, if we saw our souls, and our sins, as the Almighty does, which of us could withstand even a moment of that knowledge. For a time as recently as 1968, it was possible to receive a slight taste of that, as much as mercy would allow, from an Italian friar in the sticks of Italy. Imagine if, in order to receive communion, you had to submit to Padre Pio for confession and be absolved. Where could one go today to find such a gift?

Recommended reading for the comfortable Christian, and especially for the spiritually smug.

May the blessings of the Lord and Saint Pio be with you all this day. Have a happy Lord’s Day.