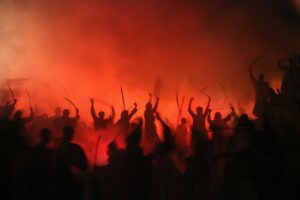 While Joe Biden raves and rants at MAGA Republicans, who he thinks are determined to destroy our democracy (which is actually a republic), the rest of the country is taking stock of Biden’s presidency and asking the difficult question: why are we supporting this man who has led this country in such a disastrous direction? I’m becoming more convinced every day that he has sealed his own fate and that of all citizens by believing that the country will be inspired by his rhetoric, which is not only irresponsible but denigrates the very people he is supposed to be serving.

Why have I come to this conclusion?

He insists on thinking that Democrats don’t realize that his administration is responsible for all the hardships that are unfolding. Inflation has risen on his watch; the borders have been decimated with his ignoring enforcement; interest rates are rising; the food and household goods continue to be in short supply.

And how is that caused by the MAGA Republicans?

Then there are his climate change causes. Biden tells us that we will all be driving electric vehicles in 15 years, even though they are very costly; they only travel limited distances; and charging stations are still in short supply, or will be expensive to install in people’s homes. And those solar power panels for rooftops? If the roof or the panels are damaged by installation or afterward, insurance companies will likely not cover them.

And how is that caused by MAGA Republicans?

In addition, there are all the changes that Biden promised to his followers: gun control legislation; national abortion legislation (even though SCOTUS says that legislation belongs with the states); reform to the criminal justice system (although no one seems to know what that means); dealing with crime all over the country; stopping voter suppression (as Americans support voter ID laws); and dealing effectively with China and Russia.

And how are these factors caused by MAGA Republicans?

Biden is in serious trouble, and with his raging rhetoric, he’s only making his public persona worse. And yet, in his speech reminiscent of a Nazi forum, he made the following comment:

But the heart of Biden’s address was a ringing alarm bell about what he called ‘an extremism that threatens the very foundations of our republic.’

‘MAGA forces are determined to take this country backwards. Backwards to an America where there is no right to choose, no right to privacy. No right to contraception, no right to marry who you love,” he said, striking on cultural issues Democrats believe can help them win in November.

‘They promote authoritarian leaders,’ he went on. ‘They fanned the flames of political violence.’

If we parse just this particular comment, there is no legitimate evidence that any of these outcomes have anything to do with MAGA Republicans (except perhaps January 6, when a MAGA Republican was killed by the Capitol Police). In fact, who are these MAGA Republicans?

According to the Pew Research Center, 43 percent of independents and nonaffiliated voters supported the former president, as did 4 percent of Democrats. Are we going to declare them ‘MAGA Independents’ and ‘MAGA Democrats?’ By transitioning from ‘MAGA Republicans’ to ‘Trump and his supporters,’ the scope of those who may be classified under the ill-defined ‘threat to democracy’ is widely broadened. . .

What is new is how the Biden administration is further expanding components of the National Strategy for Countering Domestic Terrorism and using powerful federal agencies to target political opposition. The Democrats’ intent is clear: anyone who rejects their agenda is an enemy.

If you dissent from the narrative or oppose the radical agenda, you will be branded a ‘MAGA Republican.’ And Democrats consider ‘Maga Republicans’ to be fascists. Don’t be fooled by their doublespeak.

In the end, no voters like to be attacked for their choices by those seeking votes.

Make no mistake: this isn’t the Democrats fired up and ready for war.  This is the rage of the rejected and the dejected.

It is now up to the GOP to make adverts carrying excerpts of Biden’s toxic rhetoric to fire up not only GOP voters but independent voters who may not have watched the entire speech. [Italics are mine.]

Republicans can no longer sit back and watch the frightening signals that Biden is sending out. There is much more to lose than they are willing to admit, and they must act now:

There is a very real possibility that Biden will back up his threatening speech with actions. He may not round us up in ghettos (at least not in his first term) but make no mistake: He just declared war on 74 million of his fellow Americans. If Republicans don’t win big in the midterms, or if Joe Biden gets a second term, there will be no stopping the Left. Our most sacred rights—freedom of speech, freedom of religion, freedom of association, the right to bear arms—could go away—poof—like all that student debt he just ‘forgave.’

What is it going to take for the Republicans to speak out and tell the truth?