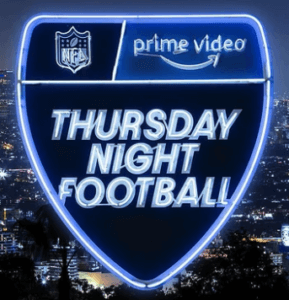 How much would you be willing to pay to be the exclusive home to an NFL game? How about $67M per game? When you break it down, that’s what Amazon Prime is paying the league for its package of Thursday Night Football that debuted Thursday Night.

I expect the coverage to be unremarkable. Amazon has done nothing but hire broadcast network veterans to run the show. For everyone to get comfortable with each other, they’ve been taping practice games for weeks. Will there be moments that Al Michaels and Kirk Herbstreit step on each other? Maybe. But the only wildcard in this pack is the production truck itself. While it comes from one of the leading providers of remote facilities, Game Creek Video, it’s brand new. And brand new anything that complicated comes with surprises. That’s why Bezos paid for all those practice games.

The real question is will the audience be able to find it? Your benchmark will be $16.4 million, that’s the combined numbers between the Fox/NFL Network simulcast of the same package last season. Interestingly, Amazon is only promising advertisers 75% of that, around 12M per game. (For perspective, the worst draw in the NFL – a matchup between two losing teams late in the season draws around 4M on a Sunday afternoon.)

As it has since cable entered the picture in 1990 – ESPN and Turner once split a Sunday Night package – the league will require Amazon to sell the games to broadcast television in both teams’ respective markets. If you’re in the Kansas City area last night the game was on KSHB (41) and in Los Angeles it was available on KTTV (11). And those stations will be included in Prime’s viewership numbers. (Next week: Pittsburgh WPXI (11) at Cleveland WEWS (5).)

This deal is scheduled to run until 2033. But as rights fees outstrip revenues, a network contract doesn’t mean much. ESPN bailed a year early from its last NASCAR package. Fox couldn’t wait to get out of its deal with the USGA. Yes, this is the NFL but nobody, not even Jeff Bezos, is required to lose money forever.