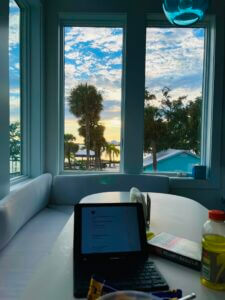 I’ve looked out over these waters hundreds, if not thousands of times before. Early this morning the heavens opened and lo, it rained with such punch and ferocity I thought maybe I had missed the ark. It’s all quiet now, though we’re due another deluge in an hour or two. Above all, however, it’s the quiet itself that soothes the spirit. Seagulls scavenge overhead while here, on terra firma, palm tree fronds shimmer and rustle lightly in the breeze. A time of new beginnings, yes, but a time of uncertain transition and bittersweet emotions.

While the appropriate announcements were made to some on social media, I’ve not yet disclosed this to my friends at Ricochet and elsewhere. Many of you may recall the excitement with which I announced my engagement to a remarkable lady in Memphis back in 2014. And indeed, the wedding was a storybook success. Shelley and I found each other in a time of personal upheaval and we each became the rock to which the other would cling in stormy seas.

There are no heroes or villains in this story, but the reality is that once the tumult subsided and life returned to a sort of normalcy, very real differences in our lifestyles, priorities, and perspectives surfaced. While not indicative of a “right” or “wrong” way to live, those differences became increasingly pronounced over time so that even through marriage counseling, it became clear that we were on very different and mutually exclusive paths. And so it was, a few months ago that we filed for divorce. There is absolutely no acrimony between us, and we embrace each other’s families as our own.

Nearly two weeks ago, there being no reason on God’s earth for me to remain in Memphis, we exchanged rather emotional goodbyes and I departed for the tranquility and comparative serenity of Florida. I miss terribly many of the good people with whom I became acquainted and befriended in Memphis, but I can’t say that I will miss life in a major city that’s been reduced to little more than a very large prison yard with barbecue, whose dumb savagery causes the rest of the nation to shake its head in disbelief.

Happily, I have family situated throughout Florida so that I had a place to land while plotting out what happens next. Job prospects are on the horizon and we shall see what direction events proceed next. A return to normalcy also indicates a return to those passions and talents which have become more or less hallmarks of my time on this earth. So expect to see much more in writing from me and — once I’m settled in — a resumption of the podcast and related endeavors.  Which reminds me; If any of you know of a good writing job, I know a guy… 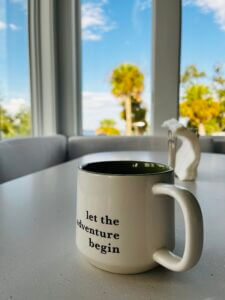 Gazing once more at the placid calm of these beautiful waters, momentarily kissed as they are by sunlight peaking through looming clouds, it’s possible to be both blasphemously happy, yet cautious about what comes next. It’s time to embrace life in all its uncertainty, cling fast to eternal truths and The Author of truth itself, and get on with things.

Winston Churchill observed that, “We make a living by what we get, but we make a life by what we give.” Confident that my Redeemer lives, I will make a life by giving life and breath to the meager gifts which He has trusted me to employ. It really is good to be back.