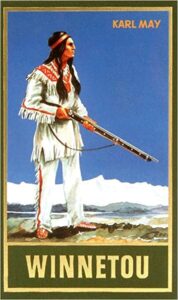 If you have lived in Germany, or even German-speaking Europe, for any length of time in the last 100 years or so, you have probably heard of Karl May. For those of you who have not, a brief introduction is in order.

Karl Friedrich May (1842-1912) was a minor con man, then newspaper editor, then an astonishingly productive author of mostly orientalist and western-themed adventure novels that sold like warme Semmel as we say around here. He is by a good league the most-read author in German (Sorry Goethe and Schiller, love you, but Zahlen lügen nicht) and his most famous creation is without a doubt Apache Chief Winnetou, who appears with his European-frontiersman ally, Old Shatterhand. In four full-length novels, bearing the name Winnetou in the title, and as a supporting character in several short stories and other novels. The cover of one popular edition of the first Winnetou book is shown above.

The novels were filmed in the 1960s. Here’s the trailer for the first one, starring Pierre Brice as Chief Winnetou (Warnung: Deutsch):

And Lex Barker plays Old Shatterhand. Yes, the films have a rather high cheese quotient, but they are as fun as most Hollywood westerns of their era. Not cinematic masterpieces, but above average. And with a solid moral framework in their storytelling.

Then, just a few weeks ago, the new kids’ movie Der junge Häuptling Winnetou was released. It was the first new (non-parody) Winnetou film in 54 years, and the public was thrilled with the idea. At least, some of the public. Until it hit theaters.

Some reviews took the film apart as a kitsch-ridden, cliched, badly-acted kids’ film, the likes of which Germany is kind of known for (the Bibi und Tina movies come to mind).  And the box office results showed. Financially, the movie is a disaster, having cost about 5 million Euros and brought in barely a hundred thousand.

You’d think that it would be allowed to sink into obscurity in peace…but, Nein! The Wokies of Deutschland saw the release of the film and the book as an opportunity to attack “kulturelle Aneignung” and “Rassismus” in the Winnetou series as a whole. The publisher, Ravensburg Verlag, which had planned to release new series of children’s books based on the film, withdrew them, stating that their publication had “hurt other people’s feelings.” The broadcaster MDR said it would apply a “racial stereotypes” warning to the films in the future. And from some quarters, particularly the readers’ comments sections of Die Zeit and other papers, there were calls to ban all media with “Sexismus, Rassissmus, White Supremacy,” of which the Winnetou books and movies are just one example. (Link)

Then, a funny thing happened. Politicians on the left and right, from Sigmar Gabriel (SDP)and Claudia Roth (Greens) to Carsten Linnemann (CDU), came to the defense of Winnetou and Old Shatterhand, saying that May’s Apache Chieftain in Sioux attire was “a German hero” (Gabriel), that “the books were staying on her bookshelf” (Roth) and that his voters wanted him to talk about “real problems” (Linnemann), not whether or not one should use the word “Indianer.”

Also, an investigation by T-Online showed that much of the sturm und drang about Winnetou was, well, made up. As in, there were a whopping 17 attacks on the new Winnetou movie online prior to the decision to take the books from the market. Much of the media playing up the attempt to cancel Winnetou was, consequently, responding to what we call a sturm im wasserglas around here. And the German media, by and large, took the side of Karl May’s most famous creation, not of the fashionable form of race-obsessed Maoism that drives modern “woke” sensibilities.

Professor Susanne Schröter of Johann Wolfgang von Goethe University of Frankfurt put it this way: “Turning this into a scandal was absurd. ….To put a fine point on it, all of human history is a history of cultural appropriation,  without which there would have been no progress.”