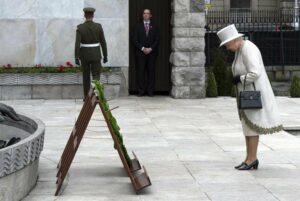 Queen Elizabeth II has passed into a place beyond time and space. She left the world on September 8, 2022, at the age of 96. She is the longest reigning monarch in UK history and probably for all time. Her son Charles became King Charles III Thursday.

As an Irishman, I have no mixed feelings today. I do not hate the Queen or the Royal Family. Neither do I hate the UK or the average English person. That is the slave mentality and I am no slave. Unless you can claim correctly to have been wounded by them, you have no excuse for such anger or hatred. I have not, so I cannot. No, I mourn and am saddened by her death.

Elizabeth was in many ways a woman I could not help but admire. She was a devout Christian, kneeling at her bed every night to say her prayers. She was sympathetic to the Catholic Church, which when she started was the black sheep of UK life. Now at her end, Catholics are back in the establishment; they even had a Catholic Prime Minister. She was a traditionalist and saw it as a duty to serve her country in how she lived her life – not to make money, utilise power or abuse the little people. She liked dogs. She was a loyal wife to her husband while he was alive and dead, and a granny to both her children’s children and a nation. But I have another reason.

Which brings me to the above photo. Many of you may not remember, but 11 years ago, Queen Elizabeth came to the Republic of Ireland in May 2011. This historic visit was remarkable as, for the first time since Irish independence (roughly 90 years), the Queen had set foot on Irish soil that was not still under British rule (Northern Ireland). It had been the goal of the Queen for nearly all her life to come south of Northern Ireland and spend time in the Republic, but because of a frosty hostile government after independence and the vicious conflict in the North after 1969 both governments refused her entry on the grounds of safety and security. Now with peace in the north, she could come.

Queen Elizabeth visited several of Ireland’s most famous establishments and its two main cities when she was here. The Guinness brewery, the Rock of Cashel, the English market in Cork, the sport stadium Croke Park, Coolmore stud farm, and of course the political centre of Dublin castle where she was granted a state reception. But it was the above location that made the greatest impression on me.

On her first day, she paid a visit to the Garden of Remembrance in Dublin. The garden has within it a monument that celebrates all the thousands of people unnamed who died in the fight to free Ireland from UK rule. The Queen was escorted in with our President and a handful of Irish soldiers, Oglaigh na hEireann, the descendants of such fighters. Here the Queen by herself walked up to the monument and laid a wreathe, and in a moment that stunned Ireland she bowed the head. The Queen of the United Kingdom honoring the very men and women who fought against her ancestors. For me, it’s a highlight of her visit, as you can imagine.

May she rest in peace, and may God have mercy on her soul.