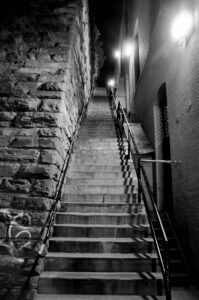 On my first trip to Washington, DC as a Civil Air Patrol cadet making my way to Canada in 1974, one of the first places I visited was the infamous “Exorcist steps” near the Francis Scott Key Bridge that connects Georgetown to Rosslyn in Northern Virginia. It was an easy walk from the Key Bridge Marriott where I was staying.

I would not see the movie until years later, but those who remember the harrowing 1973 movie will know. The website theculturetrip.com explains:

Located in the Georgetown neighborhood of Washington, D.C. is a set of stairs known as The Exorcist steps, which are famous for being featured in the 1973 film The Exorcist. In the movie, actor Jason Miller plays the role of a priest, Father Karras, who falls down the stairs head first and tumbles to his death during an attempt to try and rid a little girl of her evil spirits. . .

The stairs officially became a “D.C. landmark and official tourist attraction” during Halloween 2015. The ceremony included the film’s director and screenwriter, and a plaque was unveiled at the base of the steps, acknowledging its significance in the history of film and its popularity in D.C.

According to local D.C. folklore, every time a person attempts to count the number of steps, they will have a different answer.

It’s now a popular spot for runners and others who are exercising; they use it for leg-strengthening workouts by going up and down the stairs. Whatever your reason for visiting The Exorcist stairs, just remember to take them one step at a time.

It was the first horror movie nominated for “Best Picture” at the Oscars. Its predecessor, “Rosemary’s Baby” (1968), and later “The Omen” series were also classified as horror flicks, both of which birthed a male Antichrist. All were dark and genuinely demonic. All made some people physically ill.

But not the new adult animated feature from Disney.

“Little Demon” just launched on Disney’s FX channel via Hulu, Star+, and Disney+. Here’s the storyline, courtesy of its website:

13 years after being impregnated by Satan, a reluctant mother, Laura, and her Antichrist daughter, Chrissy, attempt to live an ordinary life in Delaware, but are constantly thwarted by monstrous forces, including Satan, who yearns for custody of his daughter’s soul.

Well, at least women earn some equal dibs on whom the Antichrist might be, after Rosemary’s Baby and Damien Thorn.

One Million Moms, a division of the American Family Association, had this to say about the new series.

Disney has taken yet another dangerous step into the darkness with its new animated sitcom series, Little Demon. Sadly, this disturbing program is brought to viewers on FXX, courtesy of The Walt Disney Company, which took control of FXX Network through its purchase of 20th Century Fox.

Along with other Disney-associated productions such as Maleficent, Star vs. the Forces of Evil, and The Owl House, this new adult cartoon series, Little Demon, is also set in a spiritually demonic realm.

According to Deadline, a Hollywood online news source, “Among other shenanigans, the comedy … shows Laura [the mother] nude with no pixilation. She strips down in the first episode to perform a ritual, while there are multiple instances of nudity throughout the series.”

Series creator Seth Kirschner told reporters, “We are going to keep going for it until we are told no.”

Let us be sure they are told, “No!” quickly!

We must do so because Disney is introducing viewers, including children who might stumble across this series, to a world of demons, witches, and sorcery. Along with the demonic content of this series, the minds of younger viewers will also be inundated with secular worldviews that reflect the current culture.

Disney describes the storyline as follows: “Thirteen years after being impregnated by Satan, a reluctant mother and her Antichrist daughter attempt to live an ordinary life.”

The show makes light of hell and the dangers of the demonic realm. Even the previews and commercials include such horrific content that it is difficult for families who watch FXX to avoid its evil subject matter completely.

It is evident that Disney is trying “to portray witchcraft as a positive tool to fight evil.” The first episode is more than enough for most Christian families to realize that Little Demon is an extremely dangerous series. Titled “First Blood,” this initial episode of the premiere season is currently streaming.

Here is some insight into the show’s background:

–       The series focuses on Laura and her daughter, Chrissy, who is the “love child,” produced from her “fling” with Satan.

–       The trailer is filled with satanic imagery, animated gore, and graphic violence, such as beheaded chickens, pentagrams, dismembered bodies, and melting human flesh.

–       Rather than being represented as dangerous, demonic, and terrifying, Satan is depicted as an average, middle-aged, cardigan-wearing suburban dad.

The new series caught the attention of one leading Republican Member of Congress, US Rep. Mike Johnson (R-LA), via his Facebook page:

The shocking ending to the LSU (Louisiana State University) opener (college football season) was not the most disturbing part of the game last night. For me, that came during a commercial break in the second quarter when the television audience was presented with the trailer for a new FX cartoon “sitcom” entitled, “LITTLE DEMON.”

I couldn’t get to the remote fast enough to shield my 11-year-old from the preview, and I wonder how many other children were exposed to it—and how many millions more will tune in to the new series, owned and marketed by DISNEY.

The trailer included dark images of Hell, demons, and satanic imagery, and an explanation that the main character is… the Antichrist(!).

Disney provides this surreal description: “Thirteen years after being impregnated by Satan, a reluctant mother, Laura, and her Antichrist daughter, Chrissy, attempt to live an ordinary life in Delaware, but are constantly thwarted by monstrous forces, including Satan, who yearns for custody of his daughter’s soul.”

The actress who voices Laura said in an interview, “I love that we are normalizing paganism. Laura is a pagan. She’s a witch. She’s jacked.”

Another online review explains that Chrissy discovers she’s the Antichrist “in grisly fashion, quickly reducing a gaggle of school bullies into piles of red goo in what turns out to be the first of many spectacularly gory sequences. Chrissy doesn’t seem overly concerned by the whole triple-murder thing, shrugging it off with an easy-breezy attitude that sets the tone for the rest of ‘Little Demon.’”

“Most of the show’s best moments come when it leans into its hellish premise and plumbs the depths of its own depravity. It’s likely you’ve never seen a man punch a hole in his own face before or heard the words, ‘Let’s go boil some babies while their heads are still soft’ in quite that order and, after two decades of South Park, Family Guy, and other cartoon shock merchants, an animated series finding new ways to disgust is a genuine achievement.”

WHAT IN THE WORLD?!?

I could write volumes this morning, and unpack pages of Bible verses here, but instead I’m just going to state the obvious: Please be careful. Our job as parents is to guard the hearts and minds of our kids. This culture has become alarmingly dark and desensitized and this is not a game. Disney and FX have decided to embrace and market what is clearly evil. STAY FAR FROM IT.

“Be sober, be vigilant; because your adversary the devil prowls around like a roaring lion, seeking whom he may devour.” (1 Peter 5:8)

Rep. Johnson’s effort to shield his children from this contrasts with Pennsylvania’s Attorney General and Democratic gubernatorial nominee’s freak out when the “my pillow guy” Mike Lindell’s commercial appeared on the television during a Philadelphia Sixers NBA game.

Did you ever think we could know the difference between political party leaders by the people or commercials they shield their children from? “Little Demon” versus Mike Lindell? We’re there.

How dare a government official cite a Bible verse, some ignoramuses will no doubt spew. Others, quick to engage in “whataboutism,” will cite the Harry Potter series. My oldest son loved the Harry Potter books by J.K. Rowling, who is resisting cancel culture for her failure to pay fealty to transgenderism. None of Rowling’s books were demonic. They were magical fiction tomes featuring charming protagonists with classic “good vs. evil” themes and characters. No delving into satanic or demonic identities. Spare me. From the Christian website, gotquestions.org:

Love is shown through selflessness and self-sacrifice; Harry’s own mother died to save him. There is a sense of justice, as good always triumphs over evil. Harry faces his fears and finds courage, even risking his own life for greater good. Friendships are defined by loyalty and unending devotion, even to the point of death.

I’m not encouraging censorship here. People can make or watch whatever they want. But evil needs to be called out and children protected when necessary.