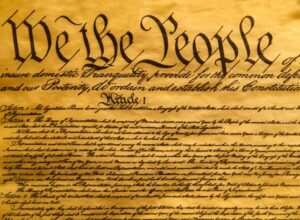 In spite of the dangers that political parties could pose to our nascent Republic, and the protests that were lodged by many of our Founders to having those parties, no mention of banning political parties appeared in our Constitution:

The framers of the new Constitution desperately wanted to avoid the divisions that had ripped England apart in the bloody civil wars of the 17th century. Many of them saw parties—or ‘factions,’ as they called them—as corrupt relics of the monarchical British system that they wanted to discard in favor of a truly democratic government.

George Washington warned against political parties when he left the Presidency in 1796. The divisions first emerged over whether to have a strong central government as proposed by Alexander Hamilton representing the Federalists; Thomas Jefferson and James Madison, who feared putting too much power in the hands of the federal government, ended up forming the Democratic-Republican party. The animosity became so great that Adams tried to stop anything that would interfere with his own goals as President and approved making the criticizing of the president and his policies a federal crime. Jefferson took revenge when he became President by firing half of all federal employees at the top, essentially wiping out the administrative state.

We could say that outcomes of the Constitution not addressing political parties was a grave error:

The Constitution itself omits any mention of political parties. Though it is not as simple as the founders not having considered it, since Madison, George Washington, and Alexander Hamilton had all written about the subject at some point in their lives. Specifically, they all had negative views on the matter, with Washington having used precious space in his Farewell Address to discuss the negative aspect of political parties, and Madison dedicating Federalist No. 10 to the issue. In fact, the paper was written in part as a safeguard against political parties, since they were explicitly recognized as inevitable by Madison. The irony is that the constitutional omission of political factions exacerbated the problem. While not mentioning something can serve as a barrier against it, in a legal environment, there is no room for chance; things as malicious as to be recognized as ‘enemies’ of free states are best explicitly prohibited by law.

Today we can observe the consequences of the Constitution not dealing with the issue of partisan politics. Are there alternatives to accomplishing the business of government without political parties? Do you think leaving political parties out of the Constitution was an appropriate decision, or do you think we are paying the price in our political environment for our Founders not addressing this divisive and dysfunctional issue?