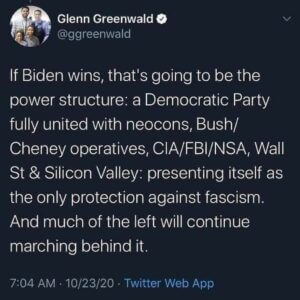 Maybe the drift towards centralized unaccountable power has been underway for a long time.  We have been aware of the growth of the ‘administrative state’ for some time. Even the FBI, which once seemed to be comprised of committed, decent normals has taken on the Ivy League pretensions of which State and CIA have long been redolent. Across the board, the top layer of senior federal bureaucrats seems to share an enforced uniform zeitgeist. And we have watched as the super-rich increasingly secularized and actively empowered the left in the culture wars.

The will to power and self-interest of the new ruling coalition are not hard to grasp.  It is the “much of the left marching behind it” part that is harder to understand.  Why, for example, would the suburban homeowner willingly vote for rapidly increasing taxes, economic policies that intentionally hurt and weaken the middle class, and for the heightened risk of social exclusion, job loss, or even prosecution for inadvertent thought crimes? Why endorse having one’s kids subjected to perverse indoctrination at all education levels and discriminated against for college admission? Why support more crime and chaos? Can it really just be about the satisfying illusion of being part of the elite or the moral satisfaction of opposing what the rulers say are forces of darkness?

In the late 1940s, the elite rallied behind the Stalinist traitor Alger Hiss in opposition to the hated Richard Nixon and HUAC.  Top law firms, major media, and past and present senior government figures supported Hiss. Being overtly anti-Communist and supporting efforts to root out the actual Soviet penetration of every level of the federal government was the MAGA hat of that era—something the sophisticate simply did not do, especially if seeking a position in an elite law firm or elite federal agency.  (Pathetically, Wikipedia’s entry on Alger Hiss  bends over backward to the Hiss defense even now.)

A wry European observer told Whittaker Chambers that in the United States “the working class are Democratic, the middle class are Republicans and the upper class are Communists.”  The FBI was then on the side of the good guys, while State, DOJ, and CIA were overtly sympathetic to the accused traitors until grudgingly forced to acknowledge the overwhelming evidence. (There was no EPA, HHS, HUD, or Education Department in those days so the administrative state was still in its adolescence.)

Who would have guessed that the collapse of the USSR and its propaganda and intel capabilities would result in even more power for the openly anti-democratic forces within the American left?  Google, Twitter, Facebook, Davos, CNN/MSNBC, etc., have come into being and are now all firmly allied with the already existing leftist bastions.

The new, Sovietless left has barely a pretense of a coherent ideology like the Communists or Nazis had.  It is instead just a naked grab for power on the grounds that they are entitled to have it by virtue of expertise, “The Science” and having detached their ties to the traditional national culture and all the déclassé tackiness that goes with it.  If Mussolini had dropped the appeal to patriotism when justifying unaccountable technocrat rule, he would have been an early Davos man.

“Diversity” is just a power move that establishes the right to punish the white middle and working class. Whether it aids or hurts minorities is irrelevant.  “The Science” governing climate policy barely provides a figleaf for the leftover power grabs that were originally envisioned when we allegedly faced the Population Bomb.  “The Science” deployed during the COVID attack on democracy was just as specious and just as falsely sanctified.

Biden and his mediocre handlers seem to have an intuitive grasp that all that is left of their claim to the support of the liberal suburban voter is the rather thin yet persistent psychological and moral satisfaction of opposing the mythical racist, planet-killing, hate-filled troglodytes, the ultra-MAGAs (Yo, represent, Ricochet!) bent on destroying life as we know it.

How do we explain much less address the problem that there are tens of millions of middle-class fellow travelers/useful idiots out there willing to sacrifice so much in exchange for a self-generated imaginary pat on the back from their betters, from people who clearly hold them in contempt?