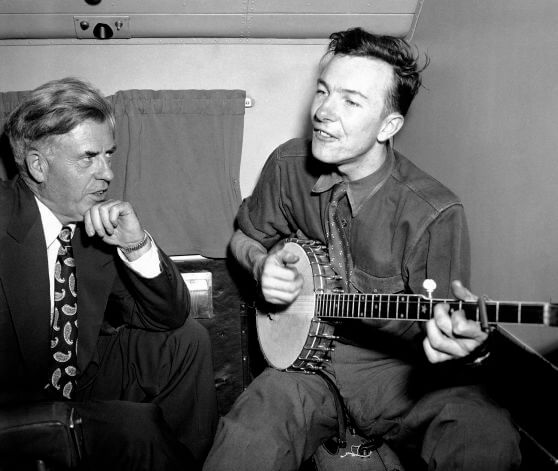 Peter has been characteristically charitable about the late Pete Seeger. I’m not so sure if I would be quite so kind.

Seeger was, above all, a musician, and a talented, inventive and highly influential one at that. That is how he should be remembered. Mostly. But, as this New York Times obituary notes, Seeger himself saw his music and his politics as inextricably intertwined, something that must bring us to his Stalinist past.

The Times alludes to this aspect of his career at various points, including this:

When he returned to New York later in 1940, Mr. Seeger made his first albums. He, Millard Lampell and Mr. Hays founded the Almanac Singers, who performed union songs and, until Germany invaded the Soviet Union, antiwar songs, following the Communist Party line….

That’s fine as far as it goes, and for anyone familiar with the history little more need be said, but perhaps the Times could have been a touch more specific. Seeger’s antiwar songs were a (supportive) response to the Molotov-Ribbentrop Pact, the 1939 treaty that divided up much of Eastern Europe between the Third Reich and the USSR and, in effect, gave Hitler the green light to start World War II.

Seeger’s stance was not solely a question of principled pacifism (or, for that matter, isolationism), it was more of a matter, as the Times notes, of following the party line.  His man Stalin was pals with Hitler, so Hitler was to be left alone.  After Germany invaded the USSR, the Almanacs’ album was pulled. Turn, turn, turn. Later, When the US found itself at war with Germany, the band recorded the pro-war album Dear Mr. President.

Seeger was to remain a man of the hard left for much of his life, only finally taking the trouble to formally distance himself from Uncle Joe many decades later. In the meantime, of course, he fell for other tyrants, not least “teacher” Uncle Ho. Simply opposing America’s involvement in the Vietnam war was not enough. Not for Pete Seeger.

And then there was this, reported by Michael Moynihan:

[F]ew, if any, obituarists have mentioned the forgotten classic Hey Zhankoye, a bizarre bit of Stalinist agitprop Seeger translated from Yiddish, recorded with the Berry Sisters, and frequently revisited during subsequent live performances. Historian Ron Radosh, a former banjo student of Seeger’s, reminds us that as Stalin cranked up his brutal post-war anti-Semitic pogroms, he was singing of a collective farm (“paradise”) where Soviet Jews lived like kings:

By all the people

Now if you look for paradise

You’ll see it there before your eyes

Stop your search and go no further on

There we have a collective farm

All run by husky Jewish arms

It’s no surprise that a man who believed the purge trials—during which approximately a million innocents were executed—were rough but necessary justice would also ignore the brutal, sustained, and widely-known campaign against Soviet Jewry.

In an article for the Huffington Post written a few years back, Jesse Larner took aim at Seeger’s impact on folk music. It’s a fascinating piece, a must-read but, in its complaints about the way “that pretty, denatured coffee-house comforts… have little to do with the life that informed the originals” it misses the point that sometimes the ‘unauthentic’, the appropriation, can stand alongside the original, and both may have something to say. At its best, that was true of Seeger’s work.

But it is not only Seeger’s music that bugs Larner. Writing–please note–from a left-of-center perspective, he comments that both Seeger’s politics and his music reflected a “condescending sentimental reductionism that masked a fierce identification with power.”

The sad and degrading fact is that Pete never really meant it, all that stuff about fighting for justice. Or, more accurately, never meant what he thought he meant. In reality, he was fighting for his own self-righteous conception of the moral, meaning that he knew what was best for you and me, and he admired those who didn’t flinch from enforcing it.

And, given the chance, Seeger was capable of a bit of enforcement himself. Take the case of one Mr. Dylan:

Dylan was nobody’s spokesman, nobody’s pet “protest” singer, and he was singing about life, not about politics. At 22, he had the adoration of millions….He could have translated this into a particular kind of role. He wasn’t interested. When he got into the abstractions of Mr. Tambourine Man, and especially when he picked up an electric guitar at the Newport Folk Festival in 1965, the folk establishment turned on him. Pete Seeger himself threatened to cut the power cables with an axe…

Zhdanov with a banjo…

And not so unrelatedly, in a broadly, if carefully, admiring piece over at the New Republic, Paul Berman notes:

[Seeger’s]  musical style was folk-primitive, with a decided tilt toward children and the grandeurs of sing-along mass participation; and the power of that style is too powerful for anyone’s good. You could suppose, listening to Pete Seeger perform, that only a fascist maniac could entertain opinions contrary to those of Pete Seeger. This is a dangerous thing to suppose.

So what to do? Well, art should not have to pass some sort of ideological litmus test.  I can enjoy Seeger’s music, at its best wonderful, in my view. Nevertheless, not forgetting what some of it was designed to inspire–sometimes for the good, sometimes not–is not only a matter of preserving historical memory, but, in Seeger’s case, of understanding his music better too.

That’s not a bad thing either way you look at it.  And if that’s uncomfortable, so be it. The past often is.