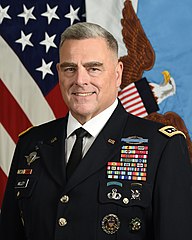 General Milley is still Chairman of the Joint Chiefs of Staff. As such, Gen. Milley is “the nation’s highest-ranking military officer and the principal military advisor to the president, the secretary of defense and the National Security Council.” So, when the President’s team decides to use Marines in dress uniform as part of his speech attacking half of the American public as domestic enemies, the Chairman bears some responsibility. Yet, he has been uncharacteristically silent. I am shocked, shocked!

General Milley was not nearly so reticent on another occasion, as I noted in “Esper, Milley, and sports as political events.” As Milley proclaimed before a graduating class of senior service college students (O-5 or O-6 rank):

As many of you saw, the result of a photograph of me at Lafayette Square last week has sparked a national debate about the role of the military in civil society. I should not have been there. My presence in that moment and in that environment created a perception of military involved in domestic politics. As a commissioned uniformed officer it was a mistake that I learned from, and I sincerely hope we all can learn from it. We who wear the cloth of our nation come from the people of our nation. And we must hold dear the principle of an a-political military that is so deeply rooted in our republic.

Consider the two events. In one case, there was actual political street violence, including the attempted torching of a church. The president walked from the White House to that church with some of his senior advisors to stand on the steps and denounce actual political violence that had played out across the country for months. We know that Milley had actively resisted activating the National Guard or providing any federal military support to restore order and protect lives and property. Milley was teaching senior officers which political party to support and which party it was correct to resist, even when that party had been put in power by federal elections.

Now Milley continues his training of officers across all services. His silence after August 31, in contrast to his fervent 2020 “apology” speaks volumes. How did uniformed military personnel, flanking a politician making a venomous political speech, not create “a perception of military involved in domestic politics?” Gen. Milley assured the military and the American public in 2020 that he had learned from his “mistake.” What did he really “learn?”

Mark Milley had already proven himself worse than Benedict Arnold. Is he now vying for Marshal Pétain status? Just to be clear, here is what Mark Milley publicly renounced as inappropriate for uniformed military members to attend:

Here is a use of uniformed military members Mark Milley approves with his silence: