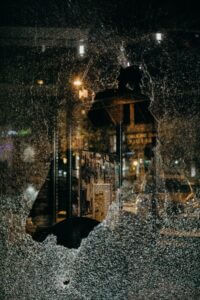 Scapegoating has led to violence against and the degradation of groups of people. Genocide in the Sudan, ‘ethnic cleansing’ in Croatia, the Holocaust in Nazi Germany, apartheid in South Africa, lynchings in the American South, honor killings of women in the Middle East and Southeast Asia — all are specific to scapegoating. History can be visualized as one long timeline of scapegoating. Wars are fought and won and ideologies cemented by the creation of stereotypical scapegoats — visual representations that put a face on the enemy for public consumption.

Can the intensity and rhetoric in America be likened to these tragic international events? Some on the Left would point to the January 6 riot; instead, I would suggest that the riots, business burnings and attacks that took place the summer of 2020 are more representative examples of scapegoating activities, attacks on the very foundations of America. The Major Cities Chiefs Association reported the following (bolded words are theirs):

In cities where violence did occur, assaults on police officers, looting, and arson were the most common criminal activities. Approximately, 72% of major city law enforcement agencies had officers harmed during the protests. This included nearly every agency that experienced at least one violent protest. In total, over the course of the civil unrest from May to July, more than 2,000 officers sustained injuries in the line of duty. One agency reported 50 officers being injured in a single week of protests. Another agency reported that 462 of their officers were injured during the protests in their jurisdiction.

Looting was also a common occurrence (2,385 instances), with 62% of major city law enforcement agencies indicating that at least one incident of looting occurred in their cities. This activity was primarily clustered during the first few days of protests. Of note, several agencies reported that in some instances, the looting appeared to be coordinated and organized. For example, some cities encountered ‘looting caravans’ that moved throughout different neighborhoods. One agency reported 115 commercial burglaries occurred in just one day. Two other agencies reported $927,000 worth of damage as a result of looting in each of their jurisdictions, and another agency reported a single looting event at a shopping mall that resulted in over $70 million in damage.

The international events were cataclysmic, and the January 6 riot was serious, but clearly the impact of riots, looting, and attacks on law enforcement are considered inconsequential to the Left, in comparison.

And then there are the lies and distortions stated by President Biden (although he took back his words the next day). From his August 31 speech:

And here, in my view, is what is true: MAGA Republicans do not respect the Constitution.  They do not believe in the rule of law.  They do not recognize the will of the people.

They refuse to accept the results of a free election.  And they’re working right now, as I speak, in state after state to give power to decide elections in America to partisans and cronies, empowering election deniers to undermine democracy itself.

They promote authoritarian leaders, and they fan the flames of political violence that are a threat to our personal rights, to the pursuit of justice, to the rule of law, to the very soul of this country.

They look at the mob that stormed the United States Capitol on January 6th — brutally attacking law enforcement — not as insurrectionists who placed a dagger to the throat of our democracy, but they look at them as patriots.

And they see their MAGA failure to stop a peaceful transfer of power after the 2020 election as preparation for the 2022 and 2024 elections.

It’s pretty remarkable that every one of these points is a distortion or lie.

Every one of them. In one speech.

For years I’ve been urging Conservatives and Republicans to speak out against the words and activities of the Left. I haven’t changed my opinion. But I am concerned that the intensity and the rhetoric is being ramped up, and after the spectacle of Biden’s August 31 speech, people are angrier than ever.

I fear that we are on the edge of violence, at least by those who have little patience for scapegoating and few ideas of how to fight back. Unfortunately, recommendations for moderating the situation are naïve and meaningless, especially for those on the Left:

The greatest antidote to scapegoating is dialogue and solidarity across different sectors of society. Ordinary citizens must combat fear and isolation by opening new channels of communication and exchange. Václav Havel’s famous call for a culture of solidarity is important again today. As he said: ‘The issue is the rehabilitation of values like trust, openness, responsibility, solidarity, love.’ In other words, citizens must take up the ordinary, unglamorous work of relating to one’s neighbors again.

Is there any way to dial back the vile rhetoric and the inherent call for action against Republicans? Is the ballot box the only way to fight back?

Will that be enough?