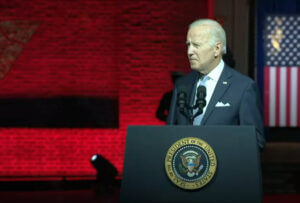 It was fitting for Joe Biden to deliver Thursday night’s Independence Hall speech at a venue lit by gas lights. Backed by a blood-red background and two military men shrouded in darkness, the president condemned half the nation as insurrectionists who pose a “clear and present danger” to the United States.

The language was deliberate as it was divisive. “Clear and present danger” is a legal doctrine created by the Woodrow Wilson-era Supreme Court to curtail the free speech of Americans. At the time, an antiwar activist was jailed for advocating draft resistance during World War I. In Schenck v. United States (1919), Justice Oliver Wendell Holmes, Jr., wrote for the majority:

The question in every case is whether the words used are used in such circumstances and are of such a nature as to create a clear and present danger that they will bring about the substantive evils that the United States Congress has a right to prevent. It is a question of proximity and degree. When a nation is at war, many things that might be said in time of peace are such a hindrance to its effort that their utterance will not be endured so long as men fight, and that no Court could regard them as protected by any constitutional right.

Thereafter, courts employed the “clear and present danger test” to limit citizens’ First Amendment rights. That is, until Brandenburg v. Ohio (1969) replaced it to address only “imminent lawless action.”

Notably, Biden resurrected this extinct phrase to attack his political enemies just as the authoritarian Wilson used it to attack his detractors. He floated a legal pretext to silence Republicans heading into the midterm elections. The administration has already directed tech companies to ban dissenting voices on social media, so such a move would be in character. Not to mention using the FBI to raid Trump’s home and the DoJ to harass Trump’s legal team.

The speech, titled “Soul of the Nation,” was an attempt to reframe the November elections as a battle between the virtuous bearers of light (like himself) and the sinister, Ultra MAGA semi-fascists. His serial message-switching between good-vs.-evil rhetoric and bipartisan unity was jarring.

“Donald Trump and the MAGA Republicans represent an extremism that threatens the very foundations of our Republic,” Biden said, adding they “are determined to take this country backward … promote authoritarian leaders and fan the flames of political violence.”

“For a long time, we’ve reassured ourselves that American democracy is guaranteed. But it is not,” Biden said between coughs. “We have to defend it. Protect it. Stand up for it. Each and every one of us.”

Having dropped back to a 38 percent approval rating, the president and his allies are obviously sweating the election looming two months away. Joe “he’s gonna put y’all back in chains” Biden has thus reverted to form, spreading hatred and division in the name of “preserving democracy.”

But a one-party state isn’t democracy. It’s an oligarchy at best and authoritarianism at worst.