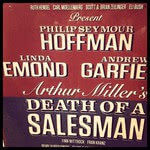 I’m too upset to think of anything much to say about this.

He was without question among the best of his time. I never was moved so deeply, so consistently by an actor’s performances. He had that deep energy. A bit of mischief and empathy in his eyes, and rough round edges that made him seem so disarmingly real on screen.

Never felt like he was faking it. (Here’s a link to a highlight reel of his work.)

In the end, it’s a story like so many others.

There were signs of trouble. A recent stint in rehab after a long stretch of sobriety.

I don’t know what to say except I’m angry and deeply sad that he’s gone.

I snapped this photo two years ago outside the Ethel Barrymore Theater on 47th street on my way in to see the show.

It was his last run on Broadway.

Why’d you have to do this, Phil?