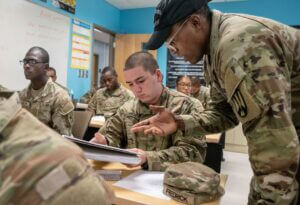 The Army has started a remedial prep program for otherwise unqualified enlistees.

Some of you may not be aware of the disastrous Project 100,000, which was a Vietnam-era project to accept large numbers of enlistees otherwise unqualified for service.  It eventually involved 300,000 soldiers who died at disproportionately high rates and had more difficulty adjusting to civilian life.

I guess it’s not a surprise that this sort of thing is happening; the service senior leadership has abandoned core missions to focus on politically progressive goals.  Something like 75 percent of enlistment-age Americans can’t qualify to join the military.  I can’t cite any dispositive proof but I believe that lowering standards means a cohort of troops much less likely to question orders.  That means when performing the core mission they are less likely to show initiative and overcome the chaos of the battlefield, and when our progressive overlords finally decide to ignore Posse Comitatus and use our military directly against American citizens these soldiers will be more likely to pull the trigger.

The end of the American experiment inches ever closer.