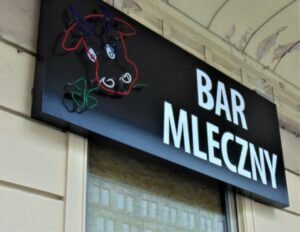 It took seventeen hours of grueling airflight and two frantic airport connections for me to travel from Kansas City to Warsaw last fall, but I knew it would be so incredibly worth it. Poland had been on my bucket list forever and pandemic be damned, I was not going to postpone this trip again. But now that I was finally here, I had a desire that must be satisfied before I could visit one cathedral or memorial – I needed lunch. A good lunch. A non-airline-food lunch. A hot, inexpensive, fast lunch. How surprised I was to find a meal that met all these criteria waiting for me in an establishment advertised by a cow with a clover in her mouth. This neon bovine is how you know you’re in a milk bar – a bar mleczny – and it was the perfect introduction to the delicious country of Poland.

Milk bars are one of the enduring remnants from the Communist era and although they are far fewer in number than during their heyday in the 1960s, the bars that survived continue to provide good/hot/inexpensive/fast meals – all subsidized by the Polish Government. And I was headed for one of the oldest and most popular in Warsaw: Bar Bambino.

Proudly anchoring the corner of Krucza and Hoza Streets, Bar Bambino serves a diverse clientele of colorful old timers, preoccupied professionals, boisterous school children, and curious newbies. (That would be me.) We were all welcome as long as we joined a line that stretched down the block. I learned that starting at 11:00, this was a daily occurrence. But the line moved quickly and before I knew it, I was inside the utilitarian dining room, staring at a wall menu in Polish. 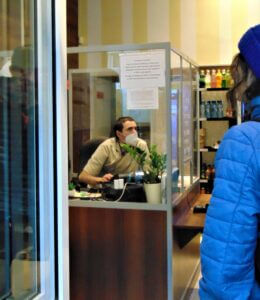 Service at a milk bar is aimed at locals so I really didn’t expect to encounter English. Luckily, I had done my homework and knew what I wanted to order. (I had even practiced how to say it in Polish.) I walked up to the very serious man in the glass booth under the menu, and in that too-loud too-slow voice we all use when we are stumbling through a language we don’t know, announced:

I didn’t even get a nod of approval at this first window, just a cleared throat, a slip of paper with my order, and a point toward another window. And believe me (gulp), the second window was more intimidating than the first.

There she was. Grim and stern in her apron and headscarf and conjuring up every memory I had of demanding 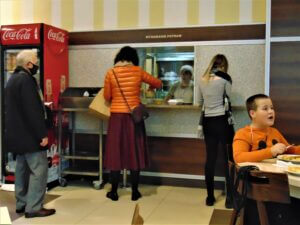 cafeteria ladies on the lunch line at Abraham Lincoln Elementary School. I slid her my order and watched my tray magically fill with food and drink in under a minute. She was a virtuoso. A true master. I managed a weak “dzieki” (thank you … I think), and then it happened. Behind the mask, a smile. She might have been grinning at my bad pronunciation, but I didn’t care. I smiled back, happily found an empty table, and prepared to finally eat.

And could there be anything better than a plate of fresh, hot, savory pierogi, expertly served up by my new friend, the cafeteria lady? Often referred to as the official dish of Poland, these little crescent dumplings can be filled with anything and everything from cheese to meat to fruit. I chose the most popular varietal in town: the pierogi ruskie, filled with quark (a soft, mildly sour cheese) and minced potatoes, topped with fried onions and butter. Particularly popular at Christmas and weddings, this former peasant food now finds itself at the center of most Polish spreads.

A large glass of kompot helped wash the pierogi down. This non-alcoholic beverage is a watery mixture of cooked fruit with cinnamon sometimes added for extra punch. The lack of any sweetener gave this brew a sour “tang” – like mixing a pitcher of original Kool-Aid without adding sugar.  Popular throughout Central Europe, kompot can be served hot or cold. (“Cold” is a relative term; mine was a pleasant tepid.) Although the majority of patrons at the Bar Bambino were joining me in a mug of the bright red beverage, kompot’s popularity has been declining in recent decades, supplanted by fruit juice and soft drinks. Pity. Kompot and pierogi are made for each other.

Was I full? Yes. Was I finished? No. I dug deep and found room for the other official dish of Poland, zurek. This complex 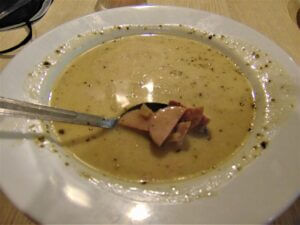 soup is made of soured rye flour (a cousin of sourdough) and is traditionally eaten at Easter. But you’ll find it on most Warsaw menus, usually served with halved hard-boiled eggs or the white Polish sausage kielbasa. I had a choice at Bar Bambino; I chose the latter. And this dish was most definitely hot.

As I finished my soup, I realized the common gastronomic thread in my completely satisfying meal was an overriding element of sourness. (Is sourness even a word?) No matter, sour had never tasted this delicious. Mmmm.

At one time, milk bars were the forced staple in Poland, providing the cash-strapped citizenry their only opportunity to dine out. But after Communism fell in 1989, the big bad chain restaurants descended, and the thousands of milk bars shrank to a few hundred. They might have disappeared altogether but for the Polish government’s 2011 decision to withdraw their subsidies and (ka-boom) – revolution! Well, more of a Twitter protest, but it was effective. People missed the cheap comfort food and decided that milk bars were warmly nostalgic rather than grim reminders of occupation. And today, their popularity is again on the rise.

Eating at a milk bar is unique among dining experiences. On the one hand, it’s warm and homey. On the other hand, it’s cold and austere. The food is plentiful and yummy; the table is bare and utilitarian. My silverware didn’t even match. And I sure never felt I was being encouraged to hang out and savor the culinary moment. The not-so-subtle message is simple: Order. Eat. Leave. A piazza, this ain’t.

So why is it that Poland seems so determined to hang onto this vestige of a bygone, oppressive era? Maybe it has to do with tradition. With common experience. With community. After all, few places provide a tie that binds like the table, even one with mismatched silverware. And I have a feeling this pull toward finding a common identity amidst the old and the new has only been heightened by the often-isolating world we all find ourselves in today. 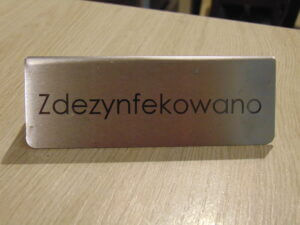 There was this shiny little aluminum sign I found on my milk bar table when I first sat down.

I had to look it up on my Google Translate app, but the meaning was straightforward: “Disinfected.” On the one hand, objectively utilitarian. On the other hand, profoundly humane.

And that’s the paradox of the Warsaw milk bar. That’s the beauty of Poland.