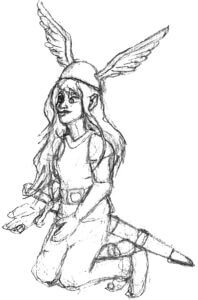 I woke up and the world had turned grey. Grey walls, grey objects, even grey air. Except for one thing, and that was full of colour. And if I didn’t know any better, I’d say it was a Valkyrie. Or rather, that she was a Valkyrie. She had long red hair that glinted like blood on copper and spilled over brass armour from beneath a wingéd helmet. She was leaning over me, feeling my neck for a pulse.

I’d heard of people feeling like they’d died and gone to heaven. I’d never yet heard them say anything about dying and being carried off to Valhalla.

When the Valkyrie saw my eyes were open and looking up at her, she frowned. But it was when she reached for her sword that I got a little concerned. I grabbed her hand. It may have been a bit ungentlemanly, but I like life as much as the next man.

Then she did something even more unexpected. She started laughing. She started laughing so hard she couldn’t help herself. In a laugh that sang like an opera. ‘It was a trick? The whole time, it was a trick?’ She had a deep, rich voice, with just a hint of smoke, laced with an accent of the old North. ‘Nay, peace, Chosen,’ she said, gently lifting my hand off her wrist. It wasn’t as if I could have done much in my condition as it was. ‘Well, here you are,’ she said, shifting from squatting on her haunches to rest one knee on the ground, ‘but what now?’

‘Didn’t think that far ahead,’ I muttered.

She quirked a coppery eyebrow, and a smile. ‘I’ll bet. But thou art Chosen. I have set my mark on you as a sworn Chooser. But,’ she continued, ‘thou art not dead …’

‘Split the difference at “mostly”?’ I murmured. I felt it, anyway. My reflection in her armour was so pale, I looked like I’d been out all night drinking with a vampire – about which, by the way, don’t ask. I must have been hanging on to life by a thread. But, the thread was important.

The Valkyrie seemed to weigh this. ‘I guess that means you belong to me, then.’

‘Not dead, not quite alive. Caught between. I could leave you to wander. But that would seem … cruel? Besides, call it a point of honour – and, I’ll admit, curiosity. I don’t know how it was done, but this is the first time I’ve seen such a trick – or even heard of it for many a long year. Well done, Chosen.’ Her smile held a challenge. I accepted. What other choice did I have?

‘But chosen as what?’ I countered.

‘That is a question,’ she nodded, gravely.

‘But you’re not going to answer it?’

She shook her head and grinned. ‘Not yet.’

I tried to get up. I didn’t quite make it. I don’t know if you’ve ever seen a Valkyrie blanch, but that had to have been close.

‘Careful,’ she said sternly, sighing as she helped me to my feet. She was very nearly my height. Or perhaps I was swaying and it was hard to tell. She was slighter than I’d first thought, but strong.

‘Is this the part where you throw me over your horse’s saddle, and it’s mead and feasting all the day long?’ I asked, trying not to fall over. The grey world was fading. ‘Shouldn’t we be properly introduced first, at least?’

‘With that wound? You’ve got to be kidding. There’s only one place you’re going, mister, and that’s hospital.’

‘You’re sending me back? I thought you said—’

‘No, I’m not sending you back. At least, not as you would understand it. You have been touched by fate. You bear a Chooser’s mark. If you go back anywhere, you will not be the same. You will tread different paths, through places that will not be the same. That you might not previously have even been aware of.’ She set a hand on my shoulder. Even the remains of the greyness faded, to be replaced by a room in living colour – albeit washed out. Her armour faded too. She was wearing a medical uniform, her hair tied back severely. I found her reaching under my arm as I staggered.

‘Emergency here,’ her voice rang out, sending people running towards her. ‘This man needs help. Get that trolley over here!’ ….

I remember fading in and out of consciousness. She kept pace beside me. I wasn’t sure if any of them could see her at that point.

When I woke again, she was standing by my bedside, writing on something in her hand. It glimmered as she folded it and slipped it into mine. ‘My number, Chosen. Call me sometime. If ever you want an adventure.’

‘I Chose you,’ she corrected. ‘… And, maybe I helped a bit,’ she admitted shyly. ‘But remember,’ – she tapped my neck, and I felt a glow pass across my sight, bright gold mixed with a dash of rich ruddy copper and ruby – ‘you belong to me …’ she sang, as she turned and stepped, fading, off into the light from somewhere else bright and cold, a fresh chill wind whispering for a moment across my neck. A few white somethings whirled on it, and landed on the bedclothes. Snowflakes. Actual thick white snowflakes.

Oh, great, I thought. A Valkyrie with a sense of humour. But … I brought what she’d been writing on up towards my eyes. Lifting my arm to do it felt like running a marathon. I opened it with clumsy fingers, and read and re-read what was written there. Committing it to memory. And then I did it again.

After the third time of memorising it, just for luck, I held it tightly in my hand, and let my arm fall slowly back down, and just lay there, smiling.

It had worked … It had really worked.

Question was, what now?

I saw the runic mark before my eyes as my eyelids became too heavy to lift, and I wended my way into sleep. I decided I could wait to answer that another day.