And Germany has been the bellwether.  Back in the early 2000s, Chancellor Angela Merkel and her party made the momentous decision to begin the energy transition from “fossil fuels” to “renewables” as quickly as they could.  The scare-quotes around both terms are on purpose, because fossil fuels are not fossils (who is to say that the geologic processes which created oil and gas are not still working on Earth?), and renewables are not either green, clean, or necessarily renewable.

Europeans decided decades ago that the entire world needs to immediately change from reliable oil, natural gas, and nuclear power; to intermittent, unreliable wind, solar, and geothermal power.  Germany has been the fastest to make this transition, and most of the rest of Europe has been following.  Many European countries shut down their nuclear power plants after the Fukushima disaster in Japan in 2011.  When I read about the changes going on in Europe, I said to myself, “Europeans, prepare to freeze in the dark this winter.”

I wasn’t too far wrong.  German citizens pay the world’s highest prices for their electricity today, and the rest of Europe is joining them.  One of the huge mistakes Angela Merkel made was the decision to mostly rely on Russia to supply them with natural gas for heating, and as a feedstock for such necessaries as agricultural fertilizer and plastics. We all know how that is turning out lately, with the Russian aggression against Ukraine resulting in sanctions upon Russia and the cutting-off of gas supplies through the NordStream Pipeline to Germany.  I just had to laugh out loud when I read about Germans relying on solar power — in a country in Northern Europe that doesn’t get that much sunshine!  They are further north than Seattle, and we aren’t known for all our sunny days.  Here’s what one business site has to say about Europe and energy:

Across Europe, national and local governments are pushing to curtail energy usage as Russia cuts its gas shipments in response to Western sanctions during the war in Ukraine.  The piecemeal restrictions have so far had minor but far-reaching impacts on daily life across the continent, with some public pools lowering temperatures, city centers losing overnight lighting and fountains running dry.

Let’s see…with less lighting in central cities, might that contribute to a rise in crime after dark?  Dry fountains aren’t a life-or-death issue, but they might contribute to a bit of depression in both residents and tourists in old European cities.  Governments are asking their people to reduce their natural gas use by 15% over the rest of the year.  Hannover, Germany is reducing the temperatures in its public pools, and its public buildings too.  Public employees need to get out those sweaters!

Munich has turned off hot water in city offices and most city fountains are dry at night.  About half the city’s traffic lights are turned off during off-peak times.  A spokesman for the city said tents at this year’s Oktoberfest won’t be heating their beer gardens with gas.

Europeans deserve what they get.  Here is what one person said about it:

In Berlin, many of the lights throughout the city center have been turned off.  Anna Soler, a 31-year-old Ph.D. student from Barcelona, said she was glad to see Berlin’s largest church was mostly dark.  “It’s good that people become aware of how much electricity we spend and we waste,” she said. 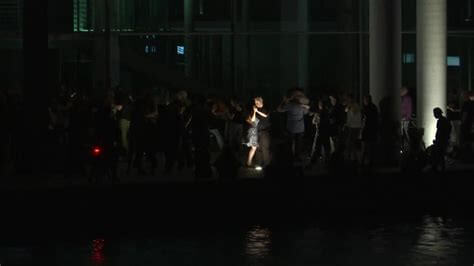 So the standard of living for most Europeans will be reduced this winter, and probably into the next few years.  They will be going back to using Evil Coal to generate electricity to keep their home lights on.  How many citizens will stay home, rather than going out after dark, into the lightless cities?  How many downtown businesses will see reduced patronage, and more break-ins when the lights go out?

The people driving the move backward to wind and solar power are Leftist Greens, and the people of Europe voted them into office.  I wonder if the average European citizen will approve of a reduced standard of living, due to their governments’ decisions on energy sources.  Beware, our “betters” in the US want that for us, too.  And it will be worse for us, because our average standard of living is higher than that of Europe, so we have further to fall.