“Go back?” he thought. “No good at all! Go sideways? Impossible! Go forward? Only thing to do! On we go!” So up he got, and trotted along with his little sword held in front of him and one hand feeling the wall, and his heart all of a patter and a pitter.” ― J.R.R. Tolkien, The Hobbit

I was driving on the old road the other day when I passed the turnoff leading to the house my husband grew up in. It was an older mid-century home, expanded on the footprint of the original farmhouse, surrounded on all sides by old, leafy oaks and ash; a few birch and fir trees obscured the driveway creating a curtain concealing it from the noisy main road beyond. It was a house full of life — until it wasn’t. It sat empty for a while, long enough to erode what man so foolishly thinks can withstand the hands of nature. Developers eventually tore it down. And most of the trees. The empty lot was the monstrosity that preceded the garish monstrosity that was eventually built.

But the worst part was seeing everything that tied my husband to this place be so effortlessly pushed aside by a team of bulldozers: learning to ride a bike in the driveway and to throw a baseball. The summer he spent camping in a tent in the yard under a canopy of trees and stars. And then I thought of the house I grew up in, only a few miles from where my family lives now — the home my grandfather built in the mid-’60s, that I grew up in, and where my parents still live — and what will happen when it just isn’t?

I hate the thought that the rooms will hear laughter that I don’t recognize; that the sliver of wall on the basement landing – the one that marked the heights of my brothers and me as we grew – from four feet to five, then inching past six, would someday be painted over, hidden from the eyes of some new family, a secret between our memories and the apparitions of time. And I hate that someday I will drive by, and I will be the stranger looking at the home my grandfather built before there was a paved street leading to it. And I hate that I will never be able to go back, not just to the house, but to a time when I knew there was a place I could go where everything was as it should be. Where I knew my brothers were asleep in their rooms under the same roof. Where we built forts in the woods behind the backyard hill. Where the oak tree stood tall and strong and old, its burled, thick bark rough under our dirty hands – a monument to permanent things, reliable and wise and seeing everything but revealing nothing. But I grew up. I grew up taking for granted that one day I could never go back.

But isn’t that the natural order of things? The enduring truth is that no, we can never go back. We go out into the world and see and hear and feel things for the first time and then many times, and to take those experiences back to where we came would be to intrude on our own innocence. It is lost to time and the hazy nostalgia of what we thought it must have been like when things were simple. The world grows larger but our sense of it becomes smaller.

“In all your years and all your travels,” I asked, “what do you think is the most important thing you’ve learned about life?”

He paused a moment, then with the twinkle sparkling under those brambly eyebrows he replied: “In three words, I can sum up everything I’ve learned about life. It goes on. In all the confusions of today, with all our troubles . . . with politicians and people slinging the word fear around, all of us become discouraged . . . tempted to say this is the end, the finish. But life — it goes on. It always has. It always will. Don’t forget that.

How do we go about our lives in such a hurry, ever impatient about the things that require patience, consuming more information before we’ve thought about what we’ve just forgotten, rushing towards the door before we even know where we are… And I wonder how I can possibly keep up with the life I don’t have time to live right now. And for what? To be a mark in time — given back to the earth just as we were born of it? Is there more — there must be more. But then the question becomes: what is more? And it’s so easy to hear the stark plainness, the total unfeeling, hard, blunt blow that mercilessly strikes the heart in Robert Frost’s words, “It goes on.”

We press on, dutifully, one day after another, and then a week, a month, a year. Until the innocence of childhood has grown into the tottery of youth, the reliability of adulthood, and finally the certainty of death. But the thing that is more, that goes on, is life. And we can make for our children what we cannot remake for ourselves. Because the best way for those memories to stay alive is to recreate them for the next generation. 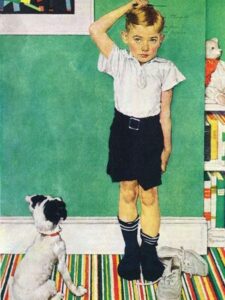 As more of our traditions are cast aside as archaic, passe, or “problematic;” as we see public schools trying to use racist policies to heal past racism; as children are exploited and used to score political points that steal their innocence, it is more important than ever to pass the lessons of childhood and growing up, unmolested from the cynicism and Behemoths that are always waiting at their heels. Children are the purest form of what humans can achieve: through their bottomless font of curiosity, their reckless disregard for boundaries, a wide-eyed incredulity at each new discovery — refreshed with each new day. I cannot understand those who look at children in our society as plagues: as disease spreaders (so we must keep them masked and isolated) or contributing to climate change, or preventing women from being content cogs in the industrial machine. Children are not the causes of our problems, but they could hold the answers, through meaning, purpose, discovery, and creativity.

Life goes on. It must. What’s left for us is to decide what kind of life it will be.

“The sun rises every morning. I do not rise every morning, but the variation is due not to my activity, but to my inaction. Now, to put the matter in a popular phrase, it might be true that the sun rises regularly because he never gets tired of rising. His routine might be due, not to a lifelessness, but to a rush of life. The thing I mean can be seen, for instance, in children, when they find some game or joke that they specially enjoy. A child kicks his legs rhythmically through excess, not absence, of life. Because children have abounding vitality, because they are in spirit fierce and free, therefore they want things repeated and unchanged. They always say, “Do it again”; and the grown-up person does it again until he is nearly dead. For grown-up people are not strong enough to exult in monotony. But perhaps God is strong enough to exult in monotony. It is possible that God says every morning, “Do it again” to the sun, and every evening, “Do it again” to the moon. It may not be automatic necessity that makes all daisies alike; it may be that God makes every daisy separately, but has never got tired of making them. It may be that He has the eternal appetite of infancy; for we have sinned and grown old, and our Father is younger than we. The repetition in Nature may not be a mere recurrence; it may be a theatrical encore.” — Gilbert Keith Chesterton, Orthodoxy