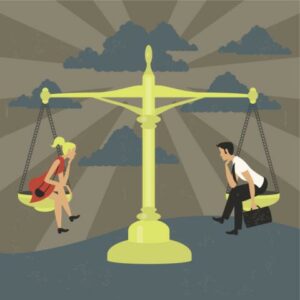 What is striking about the story is that it does not allege that the observed wage gap is a function of systematic discrimination by employers, either alone or in concert. Nor does it explain why these employers would want to hurt themselves by hiring weaker men instead of stronger women. Also left unexplained is how any lawsuits intended to rectify salary imbalance might fare in court under either the disparate treatment or disparate impact theories of liability routinely available under Title VII of the 1964 Civil Rights Act. Instead, the article makes its argument by pictorial innuendo. The opening illustration shows a male college graduate dressed in robes standing on a tall stack of ten gold coins, while his female compatriot stands on a short stack of only six gold coins—a visual depiction of wage inequality that requires rectification in the form of wage parity.

The article is surely correct in its report of the raw numbers showing these gaps in the labor market. There is, to be sure, a nagging question of whether any pre-COVID data set captures current market realities given that the Great Resignation “wreaked havoc on US labor markets.” Nonetheless, it still makes sense to concentrate on the long-term dynamics in labor markets that the Journal study purports to identify as labor markets slowly return to previous conditions.

In general, the analytical question is not whether these wage gaps exist, but whether they are related to relevant differences between men and women in the workforce, particularly on net productivity. The authors attempt to meet that challenge by observing:

Broad new data on wages earned by college graduates who received federal student aid showed a pay gap emerging between men and women soon after they joined the workforce, even among those receiving the same degree from the same school.

Thereafter they document this claim by a series of examples about specific institutions.  For example, male undergraduate accounting majors at Georgetown, who earned a median salary of $155,000 three years after graduation, already received a 55 percent premium over their female colleagues, who earned $99,000. The key weakness in this presentation is the implicit assumption that the two classes of workers provide equal benefit to their firms, for which getting the same degree from the same program is only a weak proxy. The analysis does not control for other variables that likely contribute to the observed wage gap, such as the advanced courses they took in college, the grades they received in these courses, their relevant extracurricular activities, or their summer employment. Other variables emerge once college graduates begin working, but there are no controls for the numbers of hours worked, the willingness to travel for work, the difficulty of assignments taken on, or express long-term commitment to the firm.

All these factors influence the overall product of each worker’s labor. The acid test therefore must compare the salaries for male and female employees who scored the same on these and other relevant measures to see if those gaps disappeared. As a matter of basic theory, we should expect for that to be the case given the usual dynamics of a competitive market. Accounting is a highly competitive business, and female workers who justly felt aggrieved could seek work elsewhere. Indeed, if wage gaps were attributable to a form of discrimination, other firms could either enter the market or alter their hiring strategies to take on female workers that are in all relevant dimensions as productive as men. As I stressed in my book Forbidden Grounds (1992), discrimination in labor markets will not survive even if a large fraction of firms refuse to hire women (or for that matter, men, given affirmative action programs) for reasons unrelated to their total firm productivity. It only takes a few firms at the margin to upset the established patterns. The firms that get better workers at lower wages should be able to expand relative to their more-backward peers until the market is once against in equilibrium.

It is therefore instructive to note that the Journal story does not explore these dynamics in labor markets. At most, it points to the occasional story that women are less aggressive than men in seeking salary increases. But even if that phenomenon were widespread, it could not account for the major differences observed in many areas. The simpler explanation is that existing labor markets operate such that the observed wage differences are an accurate reflection of differences in productivity, taking into account all the factors beyond college degrees that determine productivity.

There is a second side to the story that the Journal authors again leave untouched. Is it the case that men and women seek the same trade-off between their career and their lives outside work? A robust market does not assume that the distribution of men’s preferences matches that of women, or that there are no relevant differences within both male and female workers. It does not take large data sets to notice some of the obvious features of labor markets. Many women, especially married women with children, want a different balance between work and home than men do. They are, as a group, far more likely to be involved in child-raising, and thus may prefer jobs that have less travel, shorter hours, and opportunities to work more from home. Nor do all women have identical preferences: “Never-married women had the highest participation rate of all women, at 65.0 percent in 2019. Separated and divorced women were more likely to participate in the labor force (63.7 percent and 60.8 percent, respectively) than married women (58.6 percent),” according to the US Bureau of Labor Statistics.

For calculating aggregate statistics, it does not matter that there are some men who care more about work/lifestyle tradeoffs than some women. What matters is the comparison of the overall distributions of men and women, which will reflect these systematic choices rather than idiosyncratic ones.

In the legal profession—my own—the manifest differences are reflected in this simple table, which reports the state of play as of December 15, 2021:

Note, in particular, the substantial numbers of women working as in-house counsel—a likely reflection of lifestyle choices. Indeed, other data suggest that in corporate law (i.e., in-house counsel), female lawyers have moved from about 50 percent to 54 percent of the workers in this space, where the average wage is $139,510 for men and $130,105 for women, for about a 7 percent wage differential. But much of this is field dependent. In patent-related work, the ratio is about 80 percent male to 20 percent female. But when the focus shifts toward family-related work (surrogates and guardians ad litem) the ratio reverses to about 80 percent female to 20 percent male. The obvious explanation once again seems correct: these differences are driven by preferences of workers, not any form of discrimination by employers.

As these figures show, it is important to understand the basic fallacy that underlies the Journal article and so many similar studies, including those done by the American Bar Association (ABA). The ABA notes that the rising enrollment of female studies in elite law schools is not matched by their positions of power as senior lawyers, deans, and judges. However, the ABA too easily attributes these gaps to “sexism,” a serious charge that is postulated rather than documented, while the size of these gaps suggests that the dominant force here is the informed preferences of men and women alike.

As Robert Nozick reminds us in his classic 1974 book, Anarchy, State, and Utopia, it is very dangerous to assume that only preconceived “patterned distributions” will arise out of voluntary transactions. Indeed, parity suggests the heavy hand of government intervention. The operation of virtually every market will be the result of private, not collective, decisions. Each person decides which of the available set of choices should be taken, and so long as the mechanisms of exchange are in fact just—not contaminated by force or fraud—the resulting distribution of positions and income will be just as well. It fights the evidence to posit that massive illicit discrimination in favor of women in some jobs and in favor of men in others outweighs the effects of private decisions by men and women.

We should rarely think “discrimination first” in the workplace. Actual workers are far more pleased—typically about 80 percent of workers either very or moderately happy with their jobs—with their freely made choices than the chorus of critics acknowledges. The American economy derives its strength not from massive, misguided forms of government intervention, but from the decentralized and voluntary decisions of ordinary men and women. And men and women do not always make the same decisions.