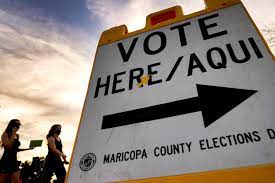 Is voting in Arizona secure?  In light of the questions regarding the 2020 elections and the 2022 primaries, this is a valid question.

First, it is important to note that no verification of residence, citizen status or identification is required to register to vote in Arizona.  You can register online by simply stating you are a resident citizen.  Or you can register simply by filling out a form and mailing/delivering it to the appropriate state office.  In fact, it is more difficult to get a “Real ID” driver’s license in Arizona than it is to register to vote.  To obtain a “Real ID you must provide a birth certificate, Passport or a valid work permit or Green card.  To become a voter, you need NOTHING except access to the internet.  It is a system primed for the creation of fictitious or otherwise illegal voters.

Arizona has also evolved to become a vote-by-mail state.  In 1991, the State loosened its absentee ballot rules.  A voter could then request an absentee ballot for any reason.  But it was not until 2007, under Democrat Governor Janet Napolitano, that Arizona adopted the Permanent Early Voting List “PEVL.”  This was essentially, mail-in voting.  In fact, it is reported that in the last primary, over 80% of the votes cast in that election were mail-in ballots. Arizona also has early voting, where one can go to certain polls well in advance of the election and cast their ballots in person.

If one votes in person, an ID check is required.  Not all ID checks are the same and of those accepted, several alternative and acceptable forms have no real identifying information at all other than a name and address.  This wouldn’t deter an illegal voter with any sense at all.

Then there is the signature check.  I was surprised in 2020 that this was no longer performed by poll workers in Maricopa County where I live.  Instead, I signed a tablet screen (you’ve seen this at many a retailer) so the check was “digital.”  I remember wondering at the time whether this was an improvement over the old system.  I’m still not sure.  Still, they check your ID, which is better by far than any other procedure, as long as the ID is one of the primary picture IDs.

The real issues lie with the early ballots.  First and foremost, every early ballot contains a bar code linking it to the registered voter.  Now this might be preferable in determining the status of a returned ballot (the code can be checked to ensure that the voter has not already cast a ballot) but it also provides a means for linking actual votes cast to the ballot and the person voting!  Now this might prove to be an excellent audit tool, but it does place in question the confidential status of a person’s ballot and vote.

Also, the only ID requirement for an early vote is the signature check on the envelope.  This is a weak control in any case as our signatures do change with age.  I don’t know the exact procedures employed to verify signatures as mail-in ballots are opened and counted, however, once these papers are decoupled, there is no revisiting the issue.  And decoupled they must be to scan the ballots and count them.

As one can imagine, many voters on the permanent early voting list fail to return their ballots early and either mail them in beyond the prescribed date or bring them to a poll station.  This places poll stations with the added burden of dealing with late early ballots.  This is the main reason election results take so long to compile in Arizona on election night.

Now, here are some of my thoughts as to how these issues might be addressed and election integrity enhanced.  First and foremost, proof of citizenship and residence must be required to register to vote.  For citizenship verification, that would be, a current US Passport, a certified copy of a US Birth Certificate or a Certificate of Naturalization and a Government Issued Picture ID (GIPID), or a voter ID card from another state that similarly requires proof of citizenship to register to vote, along with a GIPID.  For proof of residence, that would mean a current lease or recent mortgage statement or utility bill, or a GIPID, matching your name and current address.  These are essentially the same documents required to obtain a “Real ID” at the DMV, so motor voter registration would still be possible.  And online registration would also be possible as copies of the required documents could be accepted and attached to any online application.

We also need better control over the PEVL and absentee voting.  First and foremost, people need to know that their names are directly linked to their early ballots, that is, if they vote early by mail, the confidentiality of their cast ballots could easily be compromised.  This may well be a leap of trust that many voters may not want to risk.  Second, early ballot envelopes should be preserved and should contain a bar code that matches the related ballot bar code, linking it ex post facto to that ballot and the early voter.  That way, if envelopes are preserved, they can be matched with ballots in a recount or audit and signatures re-verified.

Early voters should be given a firm deadline for mailing their early ballot.  This deadline should be well in advance of election day.  Lock boxes should be eliminated altogether.  Unopened, mailed ballots postmarked after election day should be franked (pierced through with special press) as late and invalid, and preserved.  A subsequent scan of the bar codes on these invalid ballots should be made and compared to in-person voter lists to ensure that any voter did not attempt to vote twice.  If a second vote is indicated, that vote should also be invalidated and the voter investigated for voter fraud.

If a person on the PEVL has failed to return a vote and wishes to go to the polls, even the early polls, that voter should arrive at the polls with ID and with the assigned, unreturned, early ballot and envelope.  After checking ID, the ballot should be placed in the envelope, signed or unsigned, scanned to verify validity and to update the registered voter data, and voided in the early mail-in voter record.  The actual package should then be franked and retained with other voided early ballots.  The person should then be processed as a regular election day voter showing ID, providing signature and given a ballot.  Voters who bring early voter ballots to the polls should be subsequently removed from the PEVL.

If an early voter arrives at a poll to vote (so noted after ID and voter list check) but fails to bring the assigned early ballot (verified as not returned), a provisional ballot may be completed, isolated and later processed after all statewide mail-in ballots have been processed.  If no mail-in ballot is returned for that voter, the provisional ballot may be counted.  If an early vote is returned for that voter, the voter should be investigated for voter fraud and neither vote counted.

Last of all, we come to the issues with voting machines.  I assume that we have sufficient control over these machines to ensure that they compile votes accurately.  The issue is with rejection and adjudication.  The adjudication process begins with the initial scan.  If an initial scan is complete and accepted, the voter should be assured that his or her vote was cast without question.  Problems causing doubt should be addressed immediately, for example, a poll worker might ask, “Did you purposefully not voter for State Mine Inspector?” if a voter failed to cast a vote for that position.  Or better yet, a “no preference vote” might be added to be cast for any positions a voter may abstain from addressing.  This would eliminate the possibility of stuffing ballots for one race.  It should be extremely difficult to adjudicate any vote cast in person and those circumstances should be rare indeed and the process documented and conducted by representatives of all parties concerned.  There should be NO adjudication without representation and without documentation, that is no electronic alteration of ballots and certainly no bulk adjudication at all.

The same is true of mail-in ballots.  It is extremely important that partisan representatives on both sides be involved with the processing of mail-in ballots, from voter and signature verification, to scanning, to adjudication and to chain of custody concerns.  Likewise, in the review of late ballot post mark review, sorting, processing of valid ballots, and the franking and voiding late ballots.

It may be that in 1991, Arizona attempted to lift the restrictions on absentee voting, especially for snowbirds who chose to become state residents, but it was quite another thing when early voting was codified into law during Napolitano’s governorship.  We now have a bastardization of both in-person and mail-in voting, which has become an administrative nightmare, causing confusion and inviting fraud, and making it impossible for us to compile results in anything like a reasonable time after election day.  This does not inspire confidence in our elections.  And worse, we make it easy for non-citizens to register and vote in our elections.

It’s time to tighten things up. Arizona elections have become an embarrassment.  You can call it “Clean Elections” all you want, but if you want to inspire confidence, it takes more than a commission, a title, and a bunch of empty sloganeering.