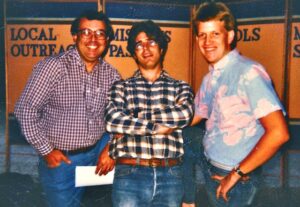 I have never been what one would call a dapper dresser.  Jeans or shorts and a t-shirt: What more does one need?

Way back in the 1980s, I was an intern at a Southern California megachurch. I came newly married from seminary to serve nine months with the pastoral staff. The staff dressed casually, but it was “business casual.” This distinction was completely lost on young me who continued to wear what I always wear, not noticing that others were wearing kaikis and collared shirts while I wore my Levi’s 501s and a variety of “Young Life” tees and sweatshirts .

So, one day my mentor, Paul Sailhamer, sat me down and pointed out that I should consider dressing a little nicer. And he gave me a $100 gift certificate for an upscale department store. He said I could use it however I wanted. If I wanted to buy a whole bunch of socks that was fine. And what I really appreciated is that, though Paul didn’t say so, I was pretty sure it was his money not the church’s. I started dressing a little nicer.

Paul, my mentor and friend, passed away on July 10th of this year, and I know many people who are saddened because they’ve lost one of their best friends. Paul was one of those rare people who makes you feel like you’re one of the most important people in his life – even if you know there are hundreds of other people who feel the very same way.

During my internship, Paul was serving as executive pastor of a church with a membership of 5,000 or so, but he was always generous with his time. He met regularly with me and the other intern, Craig Cook, as we talked about ministry. I recall Paul talking about the advantages of interning in a large congregation, “You’ll observe all the crises and changes over this one year that a small congregation will go through in ten years.”

Paul was an avid reader and shared that love with all of us. As interns, we read a variety of things, from Eugene Petersen’s Five Smooth Stones for Pastoral Work to J. F. Powers’ comic novel Morte de Urban. He started every day with Scripture, followed by The L. A. Times. It never seemed like there was a topic I could mention that Paul hadn’t read about and had an opinion on. (One day, for example, I mentioned something I’d read about English Prime Minister William Gladstone’s rumored scandals with prostitutes, and Paul launched into a mini-lecture about whether the famed politician was involved in sin or ministry.)

Paul seemed most content while he was reading quietly with others. I remember such times with Paul and his wife, Sue, along with me and my wife, Mindy. Every few minutes someone might share what they’d just read, but usually, we were happy just to read and be together.

Paul felt it was important to keep up with pop culture. I remember being at his house to watch the Academy Awards when he had a second TV running to watch the NCAA Basketball Final. When famed theologian Francis Schaeffer’s son, Frankie, wrote and directed a strange little dystopian science fiction film, Wired to Kill, Paul scoured the newspaper movie section to find the one theater in Burbank that had the film, and Craig and I happily accompanied him to watch it. (After viewing, Paul dismissed the film as trash, but he wasn’t willing to make that judgment without seeing it.)

My friendship with Paul didn’t end when the internship ended. My first full-time ministry position barely lasted a year and didn’t end well. Paul’s words after that experience were a great encouragement. I remember visiting Paul in his office years after the internship. One of his bookshelves held a collection of stones. He told me each stone represented former interns and that he regularly looked at those stones and prayed for us.

I’m glad Mindy and I had a chance to visit Paul and Sue a couple of years ago, just prior to the pandemic. Mindy and I had taken a year to visit churches and bars and wrote a book about it. We spent a long evening discussing our year-long trip visiting churches and bars and the book we wrote about it.  It was quite evident that Paul had actually read the book. Nothing can more greatly warm a writer’s heart.

I’m sure that on entering the Kingdom, Paul heard the words, “Well done, good and faithful servant.” I’m less sure, but find it possible, that Paul responded with the question, “So, what have you been reading?”