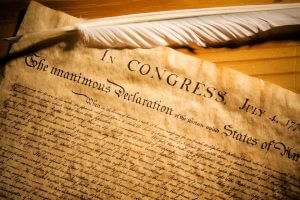 This morning I woke up in a state of—what would I call it—uneasiness? I’ve been reading the posts from Ricochet members, and couldn’t put my finger on my reaction to the frightening invasion of Trump’s home in Mar-a-Lago. Many people compared the actions of the FBI to the tyranny of third-world countries. But that parallel didn’t quite work for me. And then it dawned on me.

Our experience may be mirroring the actions of the Nazis in Germany.

I know there are people who become quite upset when they see comparisons to Nazi Germany, and I can appreciate their distress. In no way do I want to liken 12 million people exterminated with the difficulties we are experiencing in this country. At the same time, where should I go to try to point out parallels to the lawlessness and tyranny that we are experiencing here? So I apologize in advance to those who are offended, and hope that you will know that my observations are sincere and heartfelt.

Think about it: the conditions are riper than ever for someone to “take control.” Inflation gets worse by the day as people struggle to find ways to stretch their dollars. People have become more dependent than ever on the government. Lawlessness reigns on the borders. Businesses were burned and destroyed last summer, and now people are just smashing and grabbing their way through jewelry stores and elite retailers. Rogue prosecutors refuse to prosecute criminals, even when they have violated the law multiple times.

The agencies that we had relied on for so many years demonstrate over and over again their disdain for the rule of law and for the people of this country. If you are not in lockstep (yes, I intended to use that word) with the Democrats, you are to be not only discounted but tossed aside. Your word does not count. Your expectations for a free society don’t count. And your vote does not count.

They want to take our guns away, too. New laws show up regularly that are intended to compromise our second amendment rights. The most unlikely government agencies are purchasing massive amounts of arms and ammunition.

The military has sacrificed preparedness for its woke agenda. Yet we are supposed to take them seriously when they criticize China or Russia.

When we speak of Nazi Germany, we are speaking about the Jews, right? But don’t forget that those people the Nazis labeled as “different,” who didn’t fit the Aryan idea of perfection or showed resistance to their goals, were put into camps. Those identified as mentally ill (were they?) dissidents, educators, or had even a drop of Jewish blood, were condemned. In this country, what if you are a Republican or Conservative? Or were at one time? Or have left the enclave of the Left? What then?

There are many more comparisons that would work in this context, many more than I am willing to face on this Tuesday. Maybe you have the ability or inclination to identify them. It might be very important for us to take the time for this exercise, to be ready. Because soon—

They may be coming for you.