Kevin McCarthy announced that AG Garland clear his calendar and preserve his documents.

Given the widespread history of  wiping servers with a cloth, 30,000 missing emails, phones smashed with hammers, FBI intentionally wiped phones, Secret Service deleting their texts as part of an “equipment update”;  what are the chances that the SWAMP has not already purged any and all incriminating evidence of their foul deeds? What a joke.

@gleneisenhardt authored this excellent post which details how Republicans have never held the left accountable. Puffery is all we ever receive. Threats that whimper away after a brief moment.

Bleachbit and hammers allow the swamp to hide their tracks and perfidy, and lead us to this.  President Trump once questioned why we would allow millions of aliens from [REDACTED] countries to cross illegally into our country.

I question why they still want to come, as we have devolved into a [REDACTED] of a country too.

Raise the new flag of our [REDACTED] republic. 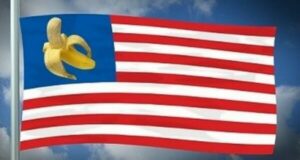