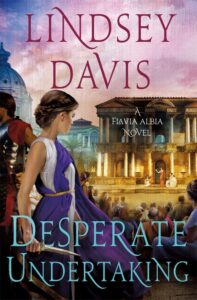 “Desperate Undertaking,” by Lindsey Davis is the tenth Flavia Albia novel. It starts at Saturnalia. Domitian is Emperor. Falco is off out of Rome, celebrating the season. Flavia Albia is holding down the fort at Falco’s auction house.

When an old acquaintance of Falco shows up, seeking to hire Falco for an investigation, Albia does what Falco taught her to do and would expect her to do. She poaches his client, convincing the man to hire her for the investigation. Chremes runs a theatrical troupe with his wife Phrygia. He was murdered in a particularly gruesome way, crucified, mimicking the final scene of the play Laureolas. (The play ends with the death by crucifixion of the main character, usually played by a condemned criminal. Theater in Ancient Rome was a full-contact sport.)

Albia agrees to investigate hoping to be paid by the dead man’s spouse. Before Albia can meet her, she ends up dead, too, killed in an equally theatrical manner mimicking the death scene from another play. Soon others are being killed in a similar manner. Their deaths are taken from scenes in different Roman plays. Those dying are associated in some way with the acting troupe run by Chremes and Phrygia.

The murders take preparation and effort. The humiliating and painful ways the victims meet their deaths indicate the killer (or killers – whoever is organizing these deaths needs assistance) have a deep-felt grudge against the victims. Albia believes the motive lies in the mutual past of all the dead. Something happened when they were in the Eastern Mediterranean. If she can find out what she can find out whom. The problem is those that might know are dying before Albia can question them. And whomever is behind this may be going after Albia, too, to stop her investigation.

“Desperate Undertaking” may be the most elaborate mystery yet written by Lindsey Davis. It brings characters from her past novels into the story, adding charm for long-time readers. It delivers a fast-paced and exciting story. If you have read and enjoyed Falco and Flavia Albia’s past adventures, you will like this one.